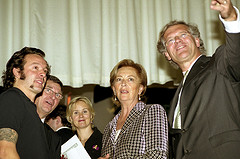 Recently returned from abroad and holding court at Interieur 06, a trade show, HSH Arne XV, Emperor of Black Rock City and King of The Uchronians received HM Paola Queen of The Belgians. They presumably traded tales of the quaint customs of the exotic natives in the outer reaches of their respective realms.
And perhaps they talked of their palaces.
The Emperor’s magnificent palace, of course, was burned down, and exists now only on flickr and in a forthcoming promotional book/DVD, produced in a strictly limited edition of 50,000.
For her part, the Queen’s palace features a remarkable work commissioned from artist Jan Fabre, which consists of the shimmering carapaces of over 1.4 million jewel beetles affixed to the ceiling and a chandelier in the Hall of Mirrors.
Previously: Arne Quinze: Branding Man
Standing too close to the fire at Burning Man
uh-on, I hope PS1 doesn’t find out about this