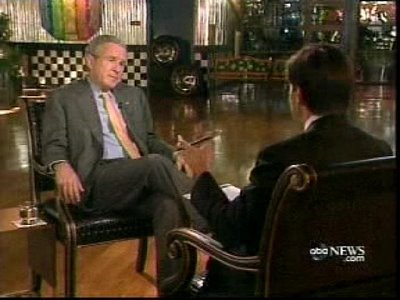 If liberal bloggers start seeing The Gay Conspiracy everywhere, too, does that count as progress?
Because that’s the prevailing interpretation on Americablog for the Sforzian Backdrop of this Stephanopoulos-Bush interview [hot George-on-George action?]. That rainbow flag-looking thing hovering over Bush’s head is probably not a subliminal Big Tent signal to Gannon Republicans, though; considering the interview took place at Victory Junction, Kyle Petty’s NASCAR-themed camp for terminally ill conservative children.
It’s the hood of a rainbow-striped car, a trophy which was seized after all the other drivers formed a mob to run the flamboyantly homosexual driver Jeff Gordon out of town. Next on the list: Jimmy Dean’s sausage [sic].
[an even better explanation, and not just because it might actually be true: it’s a rainbow flag with the word pace on it, which is just like pace cars in NASCAR. What’re the odds? And apparently, it means “peace” in Italian, too, who knew?]
Bush uses gay rights flag as backdrop for ABC interview [americablog via man [heh.]]