We had a four-hour layover at O’Hare yesterday, which was long enough to become thoroughly disgusted with CNN’s non-stop toggling between three major crises: what if that dude with the hair wins American Idol? the daily truck bombings in Iraq, and the Chocolate Jesus scandal. [The fourth piece in CNN’s rotation–how the Iraqi version of American Idol is bringing the country together–was obviously a feelgood story of hope.]
As disingenuously imaginary artistic affronts to religion go, Chocolate Jesus is definitely no elephant dung Madonna, not even a Piss Christ. The otherwise ignorable artist, Cosimo Cavallaro, is no Andre Serrano, much less Chris Ofili; his previous work seems muddled, messy, and unserious [or deathly self-serious, which amounts to the same thing.]
That said, even as my own religious self is discomfited, I think there could be some serious readings of the work appearing during this high season of hollow chocolate bunnies, but those critiques of commercialized Easter are irrelevant now, drowned out by the Catholic League’s self-(pre)serving venality.
But where was the outrage two months ago, when the same streetfront gallery, The Lab at the Roger Smith Hotel, showed “Detainee,” a performance by David Duckworth that criticized the US government’s sanctioning of torture and prisoner abuse in Iraq, Guantanamo, its network of secret CIA prisons, etc. etc. 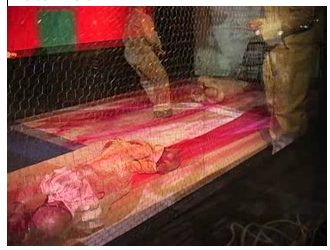 In “Detainee,” the bound, gagged, and blindfolded artist was coated in red paint, then dragged across the floor to paint an American flag. The performance was repeated over several nights, Jan. 29-Feb. 2. [edited flash video is running on The Labs’ site.]
Duckworth’s piece is a clear reference to another transparently scandalous exploration of the exploitative dynamics of power, Yves Klein’s “Anthropometries,” performances in which the artist used nude female models slathered with his trademark blue paint as “living brushes,” sometimes with musical accompaniment.

“Detainee” has, at this moment, six citations on Google, including two from The Lab themselves. Not a peep of outrage from either patriotiness-loving demagogues or those zealots who “draw near to [Jesus] with their mouths.”
Either our media society is so sanguine about the idea of American torture that it’s not, in fact, outrageous any more, or Duckworth made a fatal mistake in the attention economy when he decided to keep his detainee jumpsuit on.
Detainee, by David Duckworth, Jan. 29 – Feb. 2, The Lab at Roger Smith [rogersmithnews.com]
Yves Klein Anthropométries [youtube]