I have no idea what to make of this. Dresden painter Eberhard Havekost’s Kontakt is coming up for auction at Phillips de Pury on May 17th. Its oblique, cropped composition depicts the flat, linear patterns of the facades of the Vista Hotel and the North Tower of the World Trade Center, and a wind-flipped American flag. 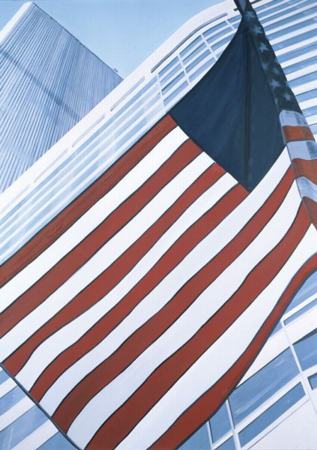 Vertiginous and fiercely cropped, Eberhard Havekost’s Kontakt reads as taut with the freight of its symbolism, the allotted canvas actually failing to contain the plus-sized reality of its subjects. Although executed prior to the terrorist attacks of September 11, 2001, it is unlikely that contemporary viewers will escape a connection—thematically as well as visually—to the journalistic and sentimental imagery that flooded the United States after those events. The buildings are rendered as flat, surface without depth, with the only indication of shadow in the image serving to slightly dim the stars and backward curl of the flag, arguably drawing more attention to them than the flag itself, boldly outlined in black. This decision on Havekost’s part seems particularly prescient, as it is a simplified graphic image of the ‘stars and bars’ at attention before a towering skyscraper—while pruned entirely of context for anyone not familiar with 9/11’s events—that has arrived as a new unassailable image in the national mindset, much like Joseph Rosenthal’s 1947 photograph at Iwo Jima, which would serve as the model for Felix W. de Weldon’s Marine Corps Memorial in Washington, D.C.

Obviously, the destruction of The World Trade Center is going to factor into any encounter with a work of art which features the buildings. As the text notes, Havekost made this painting long before the September 11th attacks, in 1998. Whatever his idea or intent was for making Kontakt, though, the context around the painting has shifted dramatically. 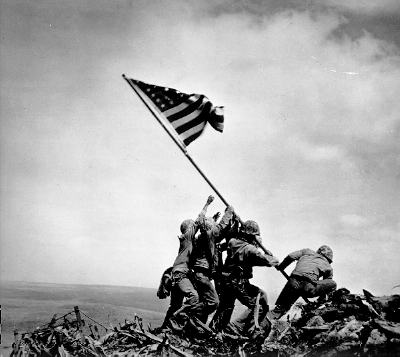 But rather than just make mention of the situation, Phillips is explicitly running with it, pumping up the importance of Havekost’s painting by torquing it into a kind of prophetic artifact. Even more disturbing, they’re marketing, not the painting, but the personal experience of weighty remembrance that comes from seeing it: it isn’t “symbolic”; instead, it “reads as taut with the freight of its symbolism.” It’s unassailable image in the national mindset.”
The Iwo Jima photo-turned-memorial comparison is another extraordinarily explicit claim to historic, iconic status that is belied by the painting’s origins. Rosenthal’s staged photo was immediately seized upon as a homefront propaganda tool to invigorate the war-weary country. If anything, its transformation into three dimensions is a memorial to the lingering echoes of the media’s own rallying cry. 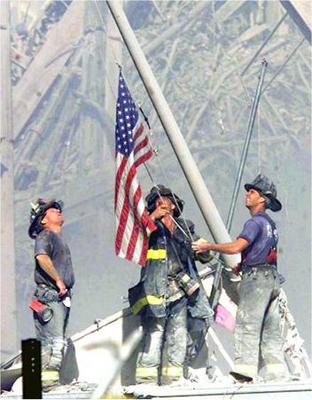 If a comparable image exists from the WTC, it’s surely of New York City firefighters rigging a flag comandeered from a nearby yacht, a cloying attempt by the media to regain their once-galvanizing reach by re-staging–lamely and literally–Rosenthal’s photo. But whatever, the icon is definitely not Havekost’s depiction of a pop-flat, human-free vacuum. Not that that stops Phillips from trying to sell it as an icon.
Kontakt‘s current owner, Charles Saatchi, is not known for his reticence, but compared to the auction house’s ambitious historical reading, Saatchi’s is pretty subdued:

This isn’t the first time Kontakt has come up for sale. It failed to reach the $20-30,000 estimate at Christie’s in 2003. Whether Saatchi bought that innocence at a private discount after the auction, or whether he was left holding onto the work for a few more years, I don’t know.
So which is it, unblemished innocence, unassailable sentimentality, or taut surface? Until I tracked down a review by David Ebony of Havekost’s first US show, in 1998 at Anton Kern, I thought I had an idea. Kontakt wasn’t included in the show, but similar architectural paintings were:

The people and places that Havekost depicts are bathed in a harsh, artificial light that adds to the work’s sense of unease and often implies a scenario of intrigue, terror and murder.
While the images are dazzlingly clear, there is a consistent distortion in the cropping and brush work that conveys a feeling of loss — a loss of the lost moment or, perhaps, lost hope…Havekost proffers an expression of modernist existential angst that is perhaps more gut-wrenching that anything found in the films or videos upon which his paintings are based.

The answer then, was ‘none of the above.’ And yet if the 1998 reading is accurate, Havekost’s painting is actually more prescient and symbolic than ever: it showed a superficiality-obsessed culture, vulnerable and oblivious to the target on its back. Which, on a morning where the headlines were of Lizzy Grubman, Chandra Levy, and getting into Marc Jacobs’ afterparty, sounds about right.
[1] It sold for $90,000, $75,000 final bid, which means only one or two bidders.