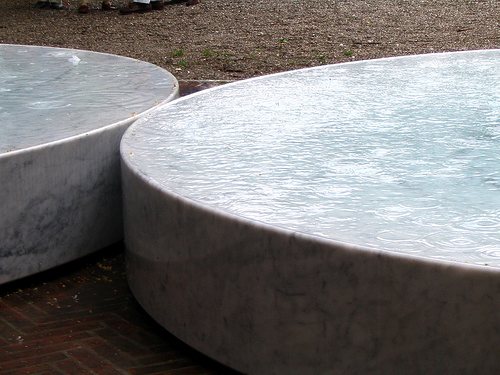 It’s actually happening. Ever since it was first announced that Felix Gonzalez-Torres would be the artist representing the US at the Venice Biennale, I’ve kind of held my breath to see if it would actually come off. And it has.
The New York Times plays to the ambiguity of meaning and open-ended experience in Felix’s work, which I guess is diplomatic. But to anyone who delves into Felix’s work and the politically charged ideas that underpinned it, I can’t see how this exhibition of these particular works, which had to be approved by the State Department, can be read as anything but an unfettered indictment of the present administration, its policies, and the culture of fear, authoritarianism, corruption, and bigotry that it foments and feeds upon.
Part of me is baffled that curator Nancy Spector and the advisory committee who recommended Felix’s inclusion “managed” to “get the work by” the State Department. But the more realpolitik side thinks that it’s just evidence of the total disregard and disinterest the administration has for something as irrelevant and inconsequential as art. In some random gallery somewhere. In Italy. Made by a dead Cuban homo. And fawned over by a passel of rich effete liberals from New York and who else? That’s it.
So really, it’s like two indictments, pushed up against each other, a damning pair. 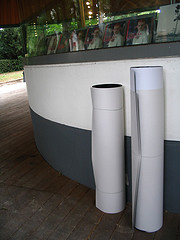 And speaking of pairs, the posthumous pools look absolutely stunning. I’d wondered and doubted about them when I first heard of the project, but a while back, Andrea Rosen and I were talking about them, and their validity, not just as work, but as Felix’s work, really sunk in. Now to see them–or to see pictures of them, we’re not at the opening this year–they are spectacular. And to remember that the original commission for them was scuttled when a university official learned Gonzalez-Torres was gay, well, they fit all too well with the rest of the show.
Hats off to flickr user SophieGrel, who is the first to post any real photos of the Biennale, including the beautiful detail above of the pools in the rain. Another favorite, which will no doubt be repeated over the next five months, is the abandoned posters around Venice.
I remember realizing I was getting closer to Felix’s show at the Museum of Modern Art in Paris as the concentration of people carrying free, rolled up posters increased. The inverse, seeing how far and how long people will carry the posters before they decide to leave them behind, is an interesting metaphor for something, too, I’m sure. What that is, I’ll leave to your own interpretation.
Previously: 1985 Act Up 1989 FU State Dept. 1996 Died 2007 Venice Biennale
Death and Venice
“On Politics And Art”, transcript of a 1995 interview Rob Storr did with Felix Gonzalez-Torres,