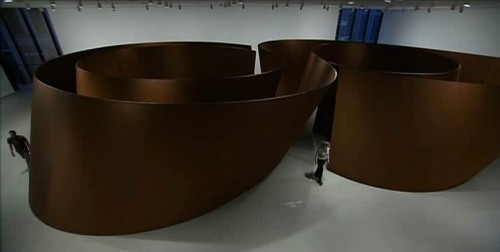 So if you’re going to see the Richard Serra exhibition at MoMA–and you should, it’s really quite spectacular–you should see it when the museum is closed, because then you have the whole place to yourself.
A friend John and I went last Tuesday morning, and we started on the sixth floor. By the second room, it was obvious that the experience of the show was really incredible. Serra’s an artist who, by design, almost prevents you from seeing multiple examples of his work; they’re site-specific–not just permanently installed in or made for, but actually about the site and the experience of being in it. By the second Serra, then, you realize you’re in rarified territory. And the first three room-filling works you encounter at the entrance of the sixth floor space really makes this clear.
The silence was shortlived; there was a crowd of middle school students sitting on the floor in the next gallery, which was crowded with very early works. I wanted to go grab each of these kids by the shoulders and shake him, saying “Do you know where you are? Remember this!” But I figured they’d figure it out by the time they got downstairs.
Was it Peter Schejldahl who mentioned how sad and domesticated the corral of prop pieces looked? I’m afraid he was right. I’m also afraid I couldn’t imagine any other way MoMA, with its constant crowds, could show the precarious work. These delicate, human-scale pieces are not the Serras around which the new building was designed, and it shows. [The hands-down best prop piece I’ve ever seen, by the way, was in the office of a dealer on 24th street. It was a square metal sheet held up by a roll that sat on the floor like a lead umbrella. The fleshy soft surface was in seductively pristine condition, too, a testament to a life in careful storage, I guess.]
The massive second floor galleries, where Serra’s early lead and timber scatter piece seemed so lost in front of the Twombly when the museum reopened, now seemed complete. The torqued ellipses and ribbons of Serra’s late/current period are, as John aptly pointed out, our real Peace Dividend. They’re made possible–and made–by advances in Military Industrial design software and manufacturing. Prowling around NASA in the past, I’ve seen utterly utilitarian instruments, objects, and components whose stunning aesthetics would drive a hundred MFA’s into the web design business.
Serra seems like one of the few artists to make a sustained, legitimate attempt at actually engaging the means of production of the Cold War. And when you consider the price tag of the new MoMA as a purpose-built context machine for these works compared to, say, the Pentagon’s weekly expenditure in Iraq, the ROI is off the charts. 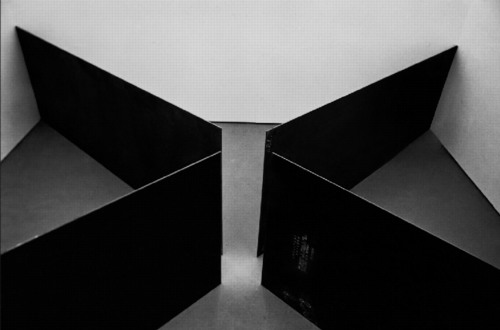 All that said, my favorite piece in the show was not, in fact, one of the sexy, transporting, transformative curved mazes on two, but a much earlier piece on six. [It could be, but it’s not To Lift, the 1967 piece made of sheet rubber, which is easily the most elegant.] Circuit II, [1972-86] is a giant prop piece which has been in MoMA’s collection for a while. Four straight steel plates are wedged into the corners of a room, creating an unsettling, compressed void where they would intersect. Circuit II was installed when I first moved to New York; it was in the Philip Johnson annex gallery known as the basketball court, which, at the time, had been the largest space in the Modern. The simplicity of the execution and the visceral spatial experience left a real impression on my fragile little just-graduated college mind. It was a kind of non-academic awe that my skeptical art history professor’s cursory lessons on contemporary art had not prepared me for.
I’d like to say I felt that sensation again, but to be honest, the new sixth floor galleries are so high, and the beautiful skylight overhead was so open, Serra’s once-overwhelming plates felt a bit quaint and conceptual, the idea of awe instead of awe itself. Or maybe it’s just me. Maybe it’s not so much the work, but my own spatial nostalgia, the kinaesthetic memory of it, that I’m loving so much, that thrill of paradigm-shifting discovery when you’re young and stupid–and your paradigms are due for several hefty shifts. Maybe Richard Serra’s works are not just shapers of space; after you’ve encountered them once, they become manipulators of time, too.
Richard Serra Sculpture: Forty Years [moma.org, thanks alex]