“Dude, you totally missed out on the shadow boxes from the Pottery Barn.” 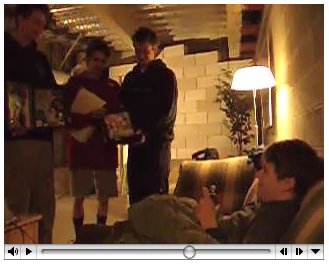 Spectacular. It’s the suburban corollary to the urban explorer-style underground cinematheque of La Mexicaine des Perforation: surreptitiously creating and programming space in that most sprawling of American of institutions, the mall.
A group of artists in Providence, RI built a secret apartment in the mall, and inhabited it on and off for nearly four years. To hide it [in plain sight of the mall maintenance and security staff], they built a cinderblock wall with a utilitarian metal door in the back of a storage space. It was furnished with products bought or scavenged from the mall:

During the Christmas season of 2003 and 2004, radio ads for the Providence Place Mall featured an enthusiastic female voice talking about how great it would be if you (we) could live at the mall. The central theme of the ads was that the mall not only provided a rich shopping experience, but also had all the things that one would need to survive and lead a healthy life. This, along with a wide variety of theoretical musings about my relationship to the mall – as a citizen and public artists – provided the final catalyst for making the apartment.
From those Christmas seasons to the present, I have spent the time to quietly create this space and occupy it from time to time. I cannot emphasize enough that the entire endeavor was done out of a compassion to understand the mall more and life as a shopper. It has been my utmost priority to not disrupt the security forces working at the mall, and I have gone to great lengths to make sure that my project did not interfere with their work.
Plans to finish the kitchen, install the wood flooring, add a second bedroom and replace the outdated cutlery were put on permanent hold recently as I was apprehended leaving the apartment. The security personnel who took care of the situation did so in a fluid and professional manner. I admit to being caught off guard after four years, and apologize for not being as forthcoming immediately with information regarding my work.

That’s Michael Townsend, of RISD, who pleaded no contest to a trespassing charge, and received 6 months probation last Thursday. His site documenting the project, Trummerkind, or “Children of the ruins,” is a reference to the German orphans left to fend for themselves in bombed out cities. Townsend’s wife, Adriana Yoto, also makes mall-based work. Her Malllife project explores the connection between shopping and identity.
The survivors of a ruined civilization angle reminds me of a recent post on BLDGBLOG about–what else?–JG Sebald, that ties the post-war German rubbledwellers to the survivors of our own impending apocalypse. Unless the just-in-time inventory replenishment is too efficient, malls might be the rallying point for bands of rebel shoppers, like the wooden fort redoubts in Costner’s The Postman.
1 room, no view [providence journal via reddit]
Trummerkind: The Apartment At The Mall