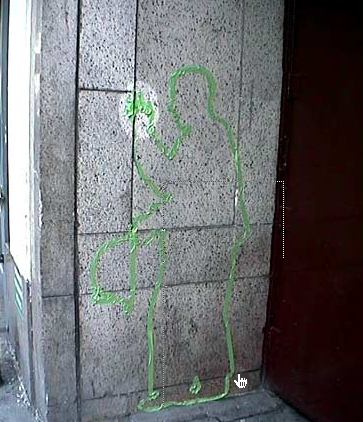 Wow. Before he became known as Apartment In The Mall Guy, artist Michael Townsend was Tape Art Guy. Over the course of five years, beginning soon after the attack on the World Trade Center, Townsend and his friends created 490 life-sized silhouette portraits of people killed on Sept. 11th using painter’s tape.
Sometimes working with permission, but mostly without, the Tape Art crew installed the portraits across Manhattan in locations that, when viewed on Google Earth, create the outlines of several overlapping hearts emanating from the WTC site. In an article last year for the 5th anniversary of the 9/11 attacks, the Providence Journal called the project, “the world’s first stealth-memorial.”
The are a few execution problems with the project: the heart shapes are a bit too Hallmark-y, and the decision to create portraits only of certain categories of the dead– airplane passengers, police and fire workers–feels like a missed opportunity to universalize the memorial.
One of the most powerful, visceral memorial ideas I ever heard was to place bronze plaques in the form of the “missing” flyers that blanketed the city’s lamp posts and mailboxes and the walls around the 26th St Armory, which served as an early rescue center in the days after the attack. Townsend’s ephemeral, handmade tape portraits dispersed throughout the city get close to the shared sense of loss, and it stands in diametric opposition to the isolated, concentrated, formalized notion of memorializing the dead at a central site.
I wonder how many of these are still around and how long they’ll stay?
Tape Art: The Eleventh of September [tapeart.com]
The Art of Remembrance [projo.com]