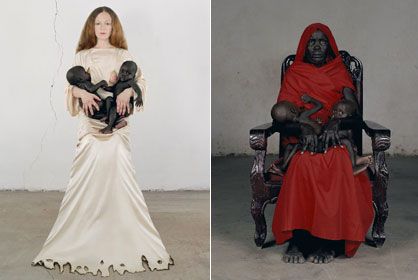 In March of 2006 I traveled with Vanessa Beecroft to Rumbek in South Sudan on two separate occasions to produce an image for her latest project, VBSS. Vanessa asked me to produce a painterly, Madonna-esque image of her wearing a custom-made dress by Maison Martin Margiela burned at the hem. There were two slit openings for her breasts in order to nurse two orphaned Sudanese twins. Vanessa was and is trying to adopt the children legally.

The vapid, superficial, self-absorbed aesthetic fetishist in Brettkelly’s new film, The Art Star and the Sudanese Twins, will be instantly familiar to anyone familiar with Beecroft’s perennially hackneyed work, which has been a lowpoint of at least two Venice Biennales [the most recent one is in the film].
NY Magazine has a nice takedown recap. It puts the interview in fashion-friendly V into interesting perspective; Beecroft’s collaborator and the outsider director make what are rather contorted attempts to be nice and non-judgmental about what is a transparently repulsive, self-damning project. Good stuff.
Filmmaker Pietra Brettkelly on artist Vanessa Beecroft’s new quest in the Sudan [vmagazine.com]
‘Art Star’ Vanessa Beecroft: Slammed at Sundance [nymag]