Holy smokes. On Archinect, Orhan has launched into a free-ranging, fantastical, and ill-informed lamentation over the impending doom that the callous, uncaring, neglectful architectural aficionado community is somehow foisting on the Neutra VDL Research House in Silverlake:

I wouldn’t elaborate on it at this finger pointing tone, but this is a city where you hear the words “inspired by Neutra” in various forms and places such as architects’ web sites, in countless design blogs, in real estate ads and of course in the circles of armchair design writers.
What abandonment.
Pages of coverage, with wall to wall color pictures, for so called Neutra specialists, when they re-build or renovate million billion dollar properties, which the architect and his pupil did years ago with clear aluminum sash and placed the glass in the right place. But, they don’t mention the VDL House, where it were all dreamed up and put to experiment.
…
After Mrs. Neutra’s death, the decay gradually became visible and impossible to hide.
Rudolf Schindler became the new hero of the Austrian invasion and people start to forget about Neutra for fashionable correctness. The same community who raised hell over a building next to MAK protected Schindler house, knew nothing of VDL house’ neighbors or didn’t care. Absurd and campy cliches like “Neutra was not as good as Schindler’ became part of groupie conversations in hipster parties.

It may very well be important for Neutra’s legacy; for the moment, let’s assume that it is. But the VDL Research House’s history is so deeply troubled, that the only conceivable way to save it is to sell it.
The current owners and stewards of the house, California State Polytechnic University, Pomona’s Dept. of Environmental Design [ENV], have proved utterly incapable of either using, maintaining, preserving, or promoting the Research House from the moment they were promised it in 1979 and from the moment they took possession of it in 1990.
According to the house’s own website, the “Urgent Campaign for Neutra VDL” has two purposes: to raise $30,000 immediately [by Oct. 2008, oops] for such basic operating expenses as insurance and utilities, and to raise $2 million, half for major repairs required after years of neglect [also resulting from original design drawbacks like putting a reflecting pool on the freaking roof]; and half for an endowment to provide ongoing operating expenses, and funds for programming and events for Pomona’s students and the broader public.
If this money can’t be raised, what will happen? According to the website, “the building complex is threatened with closure, possible sale to a private party, and quite possibly permanent loss of public and educational access.” Ooh, what abandonment.
The University that has neglected and underfunded the house for the 18 years since it received it, that apparently can’t fundraise successfully to support the house, and that lets major structural damage occur on their watch is now making an urgent plea for emergency funds. Meanwhile, they’re essentially holding the wounded building hostage, letting its conditions deteriorate until the inevitable finally happens, and the building is sold–and saved, finally–to some other entity who has a real commitment and the means to preserve it. And the only possible downside is “possible” loss of access.
The University generally and the Department of Environmental Design [ENV] specifically have demonstrated their total lack of commitment and interest in keeping the VDL Research House. In 2005, the University’s president launched a Priority & Response project to focus the school’s strategic and budgetary goals and needs. Here is a portion of a recommendation from the ENV Dean’s Office:

Over the past four years [i.e., since at least 2001. -ed.] ENV has attempted to raise funds for repairs to VDL, without much success. One impediment to fundraising is that the house is already named. Further, the VDL property serves a small portion of the ENV population of students and faculty. Since the house is 35 miles from campus, it is not a convenient location for seminars, weekly classes, or even receptions. While the College of Environmental Design recognizes this home as an icon of modern architecture, it is a much lower priority for fundraising than other projects, including a new building for the college, endowed professorships, scholarships, and a faculty development fund.

At the time of that recommendation, the estimated cost of needed repairs was $350-500,000, or half what is estimated today. The irony in several faculty statements in the P&R is not sweet:

[O]ur College is recognized nationally for its program in Historic Preservation, which has an emphasis on works of the twentieth century. The VDL house is a central feature of this program.

If that’s at all true, then the College should have its accreditation reviewed, because despite presiding over a modernist landmark built largely of manufacturer-donated materials, a pool of cheap-to-free labor and expertise, and [until very recently] a real estate/renovation/preservation boom, they have managed to push the Research House to the brink of disaster.
Proving themselves so unworthy, if the school and the Neutra fans in it honestly give a damn about the house, they’ll work to find it more capable owners, pronto. 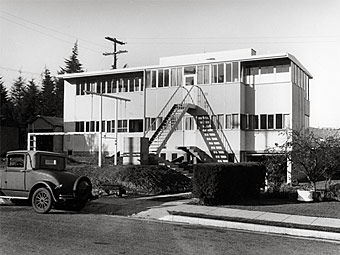 But is the house really so special it needs saving? It is certainly a Neutra design, but which design? And for that matter, which Neutra? It seems to be a question no one in the architecture community wants to bring up, lest it hurt the house’s chances for survival. 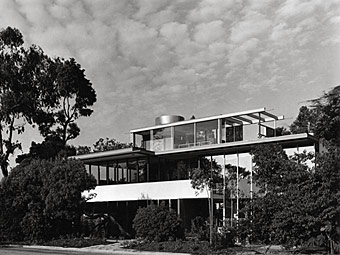 But the basic timeline and the facts of the house are not in dispute: Richard Neutra built the front, studio/residence section of the house in 1932, and he added a courtyard house in back in 1940. The front house burned down in 1963, and a new house, with a new design, using new materials, was built on the foundation in 1965-6. The architect of record was Dion Neutra, Richard’s son, who had joined his father’s architecture practice.
According to Dion’s explanations of his working method with his aging father, and looking at at least some of the drawings for the Research House II, Neutra pere watched the fils design, and then gave him feedback. A glance at photos of the 1932 and 1965-6 incarnations of the house show dramatic differences. I’ll leave definitive historical judgments to the experts, but to my mind, the Neutra design needing saving right now is an Early Dion approximation of a Late Richard.

From self-serving online chats with students, to his delusional price comparison of his father’s office building to the paintings of “Klimpt & Pollack,” to the outsized bronze plaque/tombstone declaring his intention to have his ashes scattered in the VDL courtyard, Dion Neutra’s dogged insistence on inserting himself repeatedly and aggressively into his father’s legacy might be making it difficult for more clear-eyed, thoughtful preservation and scholarship to take root. It’s worth noting that Dion is not publicly involved with the VDL campaign in any way; his younger brother Raymond, a retired physician, is the family representative.
And while the Neutra family is to be commended for their dedication and efforts, you kind of wish–and by “you,” I mean “I”–that someone in the field would sit them down and talk to them frankly about the choices they need to make between actually preserving their father’s built legacy and perpetuating a well-meaning but disastrously flawed idea without a plan that puts that legacy at risk.
Frankly, the committees, boards and friends of Neutra VDL don’t look like they have the capacity to raise $2.03 million, and until they realize that themselves, the house will just deteriorate further. The only solution they seem able to provide is an introduction to an architecture collector who will take the property off their hands. They should hop to it.
Neutra VDL Research House v. Hard Times [archinect]
Neutra VDL Studio & Residences site [neutra-vdl.org]
Previously: Neutra For Sale: Calling Michael Govin [sic]