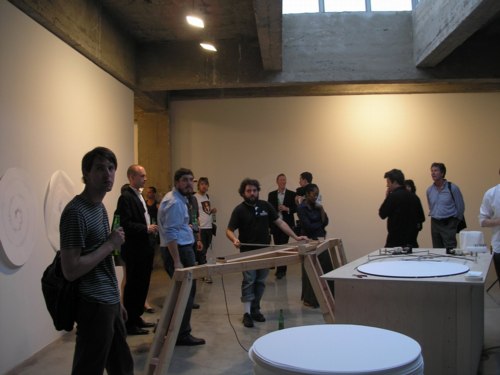 Well, he and his studio do. Spatial Vibration documents a series of collaboration/experiments concerning the relationship of sound and space. Several of the experiments are on view in a show of the same name, “Spatial Vibration, String-Based Instrument, Study II,” at Tanya Bonakdar Gallery through mid-June.
The Endless Study translates the sonic vibrations of a single-string instrument into a drawing by means of two pen-equipped pendulum arms, which record [sic] the sounds onto a rotating sheet of paper. It’s an update of a 19th century invention known as a harmonograph. 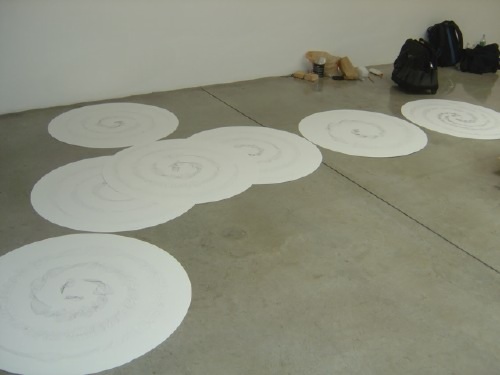 It remains to be seen what range of aural and visual effects emerge from the public’s access to the experiment. But the Studio crew, who have clearly been practicing, seem quite proficient at producing elegant, spiral drawings. But can you dance to them? Are beautiful drawings the happy accident of a particular type of performance, or is the musical composition–and the experience of listening to it–now incidental to the production of a desired drawing? 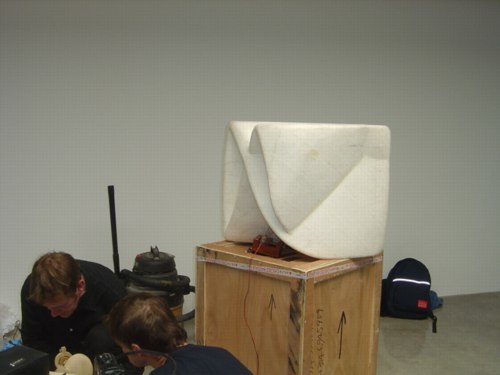 Meanwhile, another, even more ambitiously scaled experiment involves a 3-dimensional harmonograph, with a pendulum on each axis, which translates sound+time [i.e., a performance] into movement in 3D space. This path is then translated into a model. Olafur says it better:

By linking each pendulum to a digital interface I can ascribe to them the coordinates of x, y and z, and then digitally draw the spatial result of the three frequencies. They are easily tuned to a C major chord, for instance, one pendulum sounding the note C, one E, and one G. If they are given the correct frequency, the chord is harmonious and the vibrations form an orderly whole. This solidifies over time, thus drawing the contours of a three-dimensional object in space. In other words: sound vibrations can be turned into a tangible object. It is almost like building a model. One could develop this experiment into vast spatial arrangements by turning harmonious chords into spatial shapes. If we were to use a whole concert, like Beethoven’s Fifth Symphony, we might build an entire city.

An entire city. But that returns me to my previous question: would you want to live in Beethoven’s Fifth? What if the highest quality of city life is produced by something musically awful, like Mariah Carey’s third comeback album? Or an annoying corporate jingle? Do you lay down a heavy bassline to produce your city’s street grid? What would be on Jane Jacobs’ iPod?
Spatial Vibration, includes video, photos, and exhibition info [spatialvibration.blogspot.com]
Spatial Vibration is on view at Tanya Bonakdar Gallery through Jun. 7 [tanyabonakdargallery]