As the guy married to the officially coolest scientist at NASA, I admit, I took a personal, even a slightly defensive, interest when I read on Gizmodo that

Scientists from NASA’s Space Sciences Laboratory have made [magnetic fields] visible as “animated photographs,” using sound-controlled CGI and 3D compositing. It makes the fields, as explained by the scientists, dance in an absolutely gorgeous movie called Magnetic Movie. You don’t want to miss this one, which is the coolest video that you’ll see all week, guaranteed. You can’t argue with a combo of beautiful effects and amazing science.

Of course, I needn’t have worried. Gizmodo’s is just the most concretely inaccurate description of Magnetic Movie, which was produced by Animate Project. The directors are Ruth Jarman & Joe Gerhardt, a visual performance/sound-film artist duo who work as Semiconductor. It was shown last year on Channel 4 in the UK as part of the Animate TV series
But since Gizmodo’s also among the most influential blogs to have covered the film, its errors have been amplified across the web. Now Semiconductor’s aesthetic experiment is being either passed along as actual science or angrily debunked as fraud. These visceral responses based on some combination of ignorance and misinformation are the inadvertent, negative corollary to Semiconductor’s own creative process. From an interview for Animate Project:

RJ: With Magnetic Movie, it’s a short film we’ve made where we’ve interviewed space scientists about a quite specific subject that they study: magnetic fields.
JG: As the scientists would explain their ideas, their science to us, we could only understand the very beginnings of it, the surface of it. And this leads to a very kind of creative imagination of what it is they’re trying to explain to us.
…
RJ: And so we’ve listened to the scientists’ descriptions, which are very elaborate, and then we’ve tried to make our own interpretation of what these descriptions are. And we’ve created visualizations of these descriptions and placed those back within the Space Sciences Lab. 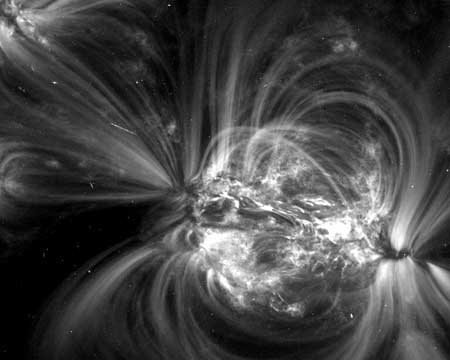 Semiconductor also tapped SSL for unprocessed scientific imagery of solar flares for their 2006 sound-film, Brilliant Noise, “We’re quite interested in things that go unseen or unheard. And a lot of scientists are dealing with these things and revealing these things to us in new ways,” said Jarman. Only the visual seductiveness of the solar imagery stands in sharp contrast to the lab itself, a shabby series of storerooms populated by a bunch of amiable nerds speaking impenetrable nerdspeak.
The irony, if that’s the right word, is that the real unseen and unheard elements in this world are the bureaucratic dishevelment and the people, the ones who amuse themselves by calling planet-dwarfing solar flares “hairy balls.” And while sound-film artists are by definition different, some of the space scientists I know are actually incredulous about the seen and the heard. When you’re dealing with magnetic fields or high energy particles all day, you work to understand the data in the format you have; the fact that they’re “invisible” is irrelevant.
Just the opposite, the inherent subjectivity and limitations of the human visual and audible spectrums actually makes them suspect. I’ve heard X-ray astrophysicists heave exasperated, skeptical sighs over the attention given to the latest spectacular photos from the Hubble telescope which, they point out, contain next to no useful data, but which are colorized to enhance their aesthetic appeal.
See the Magnetic Movie page at Semiconductor’s site [semiconductorfilms.com]
Brilliant Noise is, but Magnetic Movie is not and on Worlds in Flux, the Semiconductor DVD released last year [amazon]
At the moment, the full 4:50 version of Magnetic Movie is on YouTube [youtube]