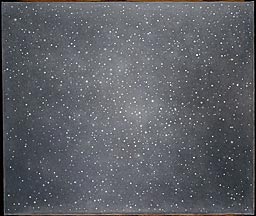 A guard at the Carnegie International defaced a Vija Celmins painting, Night Sky #2, making a “long vertical gouge” with a key. The conservator calls it a “total loss,” though the Art Institute of Chicago, which owns the 1991 painting, said they would look at the possibility of repairing it.
Though the story only surfaced on Friday in the Pittsburgh Post-Gazette, the incident occurred on May 16th [a Friday]. The guard, an Azerbaijani immigrant named Timur Serebrykov, was confronted about the action and arrested on May 20th [a Tuesday]. He initially denied any wrongdoing, but then he confessed, adding, “I didn’t like the painting.” There were eight Celmins paintings of night skies in the gallery at the time.
Guard charged with ruining museum piece [post-gazette.com via artforum]
Night Sky #2, 1991, Vija Celmins [artic.edu]