In the early 1970’s, Enzo Mari suggested using 1-by pine lumber to make his autoprogettazione furniture because it was cheap, standardized, easy to cut, and universally available at the corner hardware store. Now, my local hardware is a Home Depot, and the boards they sell come from New Zealand. So in keeping with the spirit of Mari’s design, I’m going to use components from Ikea furniture kits instead.
The dining table I’m going to make is called either F or EFFE, depending on which plans you look at [Mari’s own autoprogettazione book uses the former; Peter Stamberg’s 1976 blueprint anthology, Instant Furniture, which reproduces four of Mari’s autoprogettazione designs, uses the latter.] It calls for wood in two sizes. The truss and leg structure is made of 1×2 in lengths ranging from 10 1/2″ to 51″. The top calls for four 79-inch 1×8 planks, which actually comes to about 30″ across. [After it’s dried and finished, 1×8 boards are usually 3/4″ x 7 1/2″. I had no idea.]

There turns out to be far fewer useful sources of lumber in Ikea than I originally thought. [The idea hit me when I passed giant warehouse shelves filled with rolled up pine bed slats.] But most of the pine pieces in Ikea furniture are only 1/2-inch thick, too thin to use for underpinning a table.
Though I stuck to pine on principle, there is some solid wood furniture, mostly birch, with some oak. But by far, most of the wood-looking furniture is made from veneered particleboard; who knows what’d happen if you cut it? 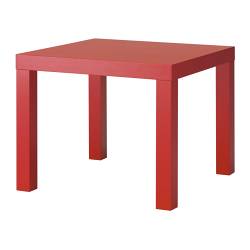 I don’t doubt you could make a quintessentially Ikea Mari table by using only these kinds of components; the sleek, plastic-over-sawdust goodness of Ikea’s signature Lack tables and shelves could make for a very conceptually tight mashup, but that’d be the second or third piece I’d make, not the first. 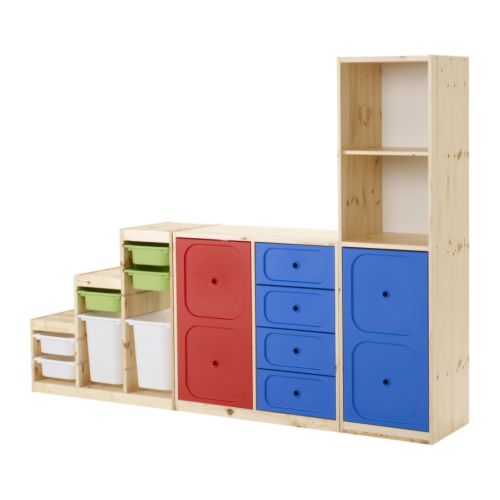 The other major constraint is the length of the boards for the top; only three products have decent width pine boards within range of 79 inches [which is 200cm, if you’re wondering why Mari picked that length]. The 5/8-in. thick sides of the tallest Trofast storage units [above] are either 11 3/4 in. or 17 in. deep, but only 69 in. tall. And some of them have regularly spaced grooves for sliding bins.
[Though it felt like cheating, I did check out readymade tabletops. The Vika Furuskog tabletop comes in pine, and is 78 3/4 in. long, but only 23 5/8 in. wide; too narrow to use, too wide to double up on.] 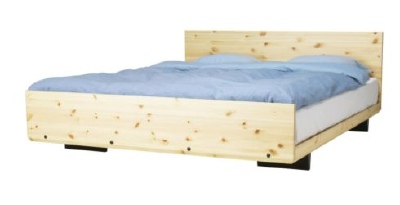 The new Mandal bed [king-size, $249] comes really close to being the perfect Mari table kit. It has a smoothly sealed headboard and footboard of solid pine, which, on the king size model, are each 78 in. long. The headboard is 23 1/2″ wide, and the footboard is 12″; placed top-to-top, they’d be 35 1/2″ wide, which isn’t too far off. As a bonus, they have both taper on the bottom edge, which would be nice on the underside of the tabletop. [There is a row of pre-drilled holes along the base of each piece, though, which kind of bugs.]
Mari’s table calls for more than 66 linear feet of 1×2 wood underneath. It’s close, but the Mandal’s inner support rails may provide enough wood without buying extra pieces. The siderails are smoothly finished, too, and each 78 in. piece is 3 in. wide on the outside face, tapering to 2 in. wide on the inside face. The unfinished pieces underneath the bed are either 7/8 x 1 3/4 in. [i.e., 1×2], or 1 3/4 square. Four 1 3/4 sq. pieces are 27 1/2 inches long, just 1/4-in. longer than the table leg specs. If more wood is needed, a $20, twin-sized Sultan Lade bed slat offers one of the best options for raw wood. The 15 slats are 2 3/4 x 3/4 x 38, with slightly beveled top corners. 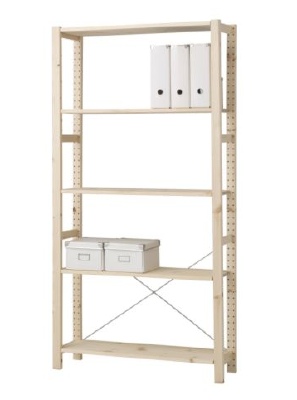 The Mandal has the added benefit of being factory sealed with a smooth acrylic finish. If it’s important to stick close to Mari’s original idea of unfinished wood, the far-and-away winner is the Ivar storage system. Ivar’s component-based, which means the shelves, side units, and corner posts may be all you need to make a table.
One pine top shelf [$19] is 3/4 x 11 3/4 x 82 5/8 inches Cut off the embedded metal brackets from each end, and it’s right at 79 inches. There’s also a vertical piece to cut off [or to not attach in the first place; the shelf I saw didn’t have it at all.] If you use three shelves, the table will be 35 1/4 inches wide, which adds 5+ inches to the horizontal pieces underneath the table, too.
Corner posts are 1 3/4-in. square and filled with drilled holes [$8, $12]. The side units are their own standard dimension–1 3/4 x 1 1/4 inches–which could be pulled apart and used as lumber. But it’s also tempting to use the ladder-like pieces whole. Both parts come in 70 1/4″ and 89″ lengths [$12, $15].
Maybe you could cut down [sic] on the sawing required by just making the table to Ivar’s dimensions instead of Mari’s. Then instead of a lengthwise shelf, you could build a top from shorter 33 x 11 3/4-in. shelves [$6] set crosswise.
I sit here trying to juggle the variables to the best effect: faithfulness to Mari’s original design; faithfulness to his concept, which is not quite the same thing; the inherent “Ikea-ness” of the inputs; the quality and utility of the output; the amount of tweaking, finishing, and labor required. And I repeatedly find myself creating a conceptual justification for the path of least resistance. All conceptual stunts being equal, I’m drawn toward the one that involves the least labor and mess. Which turns out not to be the same as requiring the least time, cost, or effort, as the 8-month over-analysis of making a simple table attests.