I loved Cabinet before I wrote for them, and I love them after. In the latest issue, #30 The Underground, Colby Chamberlain looks at an awesome 1971 drawing by Robert Smithson titled, Toward the development of a Cinema Cavern or the movie goer as spelunker. [Colby’s piece is not online, but Smithson’s complete drawing is at the Estate site.]
According to a contemporaneous Artforum essay titled “A Cinematic Atopia,” Smithson described the project:

What I would like to do is build a cinema in a cave or an abandoned mine, and film the process of its construction. That film would be the only film shown in the cave. The projection booth would be made out of crude timbers, the screen carved out of a rock wall and painted white, the seats could be boulders. It would be a truly “underground” cinema….

Smithson’s interest in cinema was phenomenological: the idea that you sit there, motionless in the dark, experiencing a continuous stream of light and sound patterns. The Cinema Cavern’s closed, self-referential loop devolves into an abstract, multi-colored blur, with the “sluggish,” sloth-like movie goer none the wiser.
Colby puts Smithson’s cinema into context with the Underground-brand cinema of the day, as embodied by Stan VanDerBeek, Jonas Mekas, and friends. Which is fine and all; meanwhile, I’ve added the Cinema Cavern to the list of sketchy Smithson ideas I’d love to see realized here and now.
Part of me–the part who, admittedly, has not delved into the Smithson archives, and thus doesn’t know more than the single sketches–sees the Cavern Cinema as just as fully developed and thus, valid for realization, as, say, Floating Island. And part of me is still smarting for not getting to Les Arennes de Chaillot, the subterranean theater and couscous boite built in Paris by la Mexicaine de Perforation, a group of explorateurs urbains. [read my 2004 LMDP interview here.] And 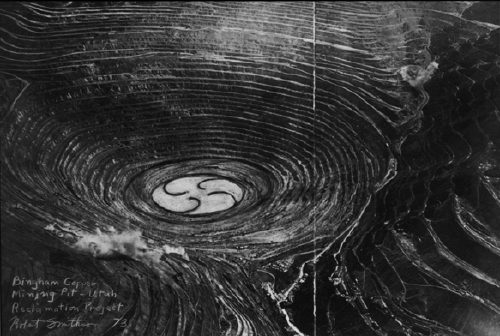 Also on the list: the 1973 Bingham Copper Mining Pit – Utah Reclamation Project. Smithson called for a giant, revolving viewing platform at the bottom of Kennecott Copper’s mountain-sized hole on the western side of Salt Lake Valley, all the better “to survey nature’s gradual and inevitable reclamation of man’s invasive enterprise” with, my dear.
[Every time I fly into Salt Lake, I’m reminded of this drawing/collage, which I rather impulsively bid on–and lost–when it came up for auction in 1993. I later met and became friends with the winning bidder, but I suspect I lost my chance at the drawing; its next stop will most likely be a museum.]
But what if Smithson’s visions already have been realized, and I just didn’t realize it? What if the Cinema Cavern and the Bingham Copper Mining Pit were combined and installed in the post-civilizational, entropic future, offering a front-row seat to nature’s reclamation?
I don’t know if it’s in David Brin’s original mid-80’s sci-fi novel, but in the 1997 film version of The Postman, the dopey title character, played by Kevin Costner, has a showdown with a “hypersurvivalist militia leader named General Bethlehem [played by Will Patton.] In one of the funniest scenes in the unintentionally hilarious fiasco, Bethlehem pacifies his troops–scraggly, murderous slaves who float around on rafts and inner tubes in a giant, water-filled, open-pit mine–with movies. As the battered projector whirs to life, the a battleworn print of The Sound of Music
PDF of “A Cinematic Atopia” in portuguese and english [sescsp.org.br]
Cinema Cavern, 1971 – Robert Smithson Estate – Drawings [robertsmithson.com]