Former NGA curator and Dia director Jeffrey Weiss writes about the state of Land Art in the latest issue of Artforum. His focus: T.S.O.Y.W., a 3-hour Earthworks road trip movie/installation by Amy Granat and Drew Heitzler shown in this year’s Whitney Biennial, and the Sculpture Center’s recent exhibition of feminism and Land Art in the 1970’s [which featured the Agnes Denes work, Wheatfield – A Confrontation in Battery Park City that I mentioned a couple of months ago.]

As Earthworks come of age, their fate has begun to look contingent and fragile. Those who are charged with caring for the sites are rightly doing what they can to forestall change; but a true poetics of Land art–given the very nature of the medium–must at least contend with the conflict between an ethic of preservation and the entropic pull of nature and culture that belongs to the content of the work. In this setting, Granat and Heitzler are melancholic visionaries. Their wheels, like reels, turn in order to draw a straight line and follow it: Their line is the road, a figure for unbounded space and inexhaustible time. But as their bike moves forward, their eyes gaze, historically, back; T.S.O.Y.W. shows us that memory has become a chief element of the temporal condition of the Earthwork. The film’s end is a running-down and out, a sudden shift from images of the infinite desert to scarred film leader, then, abruptly, to nothing at all. Forever turns out to be the ultimate conceit. [emphasis added]

Hmm, let’s ignore the conceit of a film ending abruptly while it’s actually screening on an endless loop in a gallery.
I’m intrigued by the idea that memory is a “chief element” of Land Art and its “temporal condition,” if it somehow equates to the divergence between the contemporary condition and experience of visiting the work/site and its various representations, whether in film, photograph, or documenting ephemera.
For most art audience members over the intervening decades–curators, critics, collectors and artists included– Land Art exists as books, photos, gallery presentations, and texts. At the Whitney’s Robert Smithson retrospective in 2005, one symposium panelist went so far as to argue that Spiral Jetty was primarily a film and photo work, as if the jetty itself were just a location, a bit of IMDb trivia. It sounded to me then like just the kind of critical reading that a New York art worlder would make who’d come of age when the Jetty was submerged, and who’d never bothered going to Utah in the 10+ years since it re-appeared. 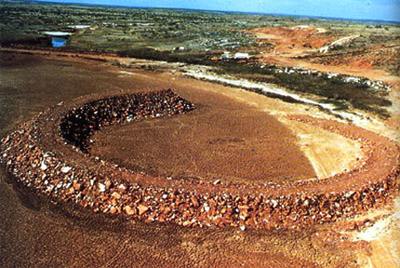 With images and expectations formed in our head, actually visiting an Earthwork can be as disorienting as meeting your favorite NPR host. Or if, as Weiss points out, the work has deteriorated over time, it’s like meeting an author who hasn’t updated his bookjacket photo for a while. And the disconnect can be jarring; When Titus O’Brien made his pilgrimage to Smithson’s last work, Amarillo Ramp, he found the powerful sculptural form of the iconic 1973 photograph had become “a worn down, weed covered, neglected berm of dirt you’d just mistake for an old watering trough dam. A phantom.” 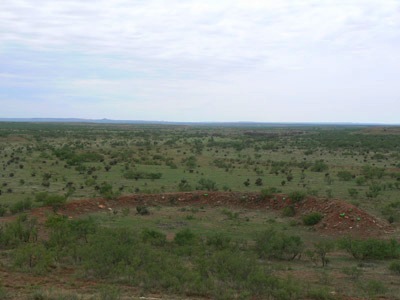 But memory is more than the gap between reality and what we think reality is; it’s the reconciliation and construction of the two. Weiss’s concerns about the complications Land Art curators face is right, but maybe not in the way he says. From Marfa to the Lightning Field to the Jetty to even Michael Heizer’s Double Negative and Turrell’s Roden Crater, the Earthworks Road Trip has matured in the last decade as both a real experience and a concept. As more people make the pilgrimages and have personal encounters with these works, not only do their memories of the works change, but other people begin to perceive the works not just as images in a book or on a wall, but as visitable sites.
I wonder how the perceptions and understanding of Walter deMaria’s Lightning Field change when they’re based, not just on John Cliett’s dramatic, official photos [via], but on firsthand accounts of the 24-hour visiting experience, very few of which appear to involve actual lightning? And how would that change if Dia and deMaria allowed visitor photographs? When it comes to Land Art in the present and future, there are still a few more conceits left to be addressed.