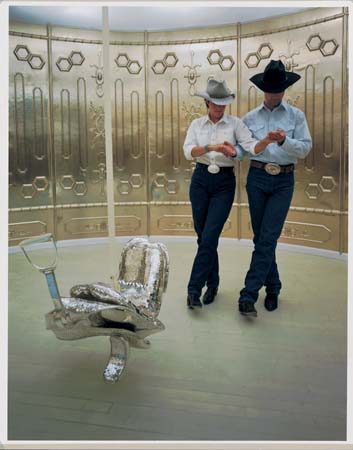 A month from now, on Jan. 31, I’ll be part of a panel discussing Mormon art and artists at the Sunstone Symposium in Washington, DC. It’s sponsored by Sunstone, a journal of Mormon religious, historical, and cultural thought. [Details and registration info are here.] The panel also includes Lisa Fraser [singer/songwriter], Erin Thomas [writer], and Jonathan Linton [artist/illustrator], and the moderator is Menachem Wecker, a DC-based journalist specializing in religious art.
Since all my fellow panelists are professional artists, I think the organizers wanted me to talk about my film stuff, or the 19th century Mormonism-related screenplay adaptation I’ve been working on, but I didn’t feel I could do that well in a panel. So I suggested–and instead will be talking about–Mormon artists and Mormonism in the contemporary art world. I’m thinking it might be a pretty short talk.
The most prominent references to Mormonism in contemporary art are obviously in Matthew Barney’s Cremaster Cycle, particularly in Cremaster 2, where cowboys two-step around the temple in Nauvoo, Illinois, and Gary Gilmore’s parents visit the spiritualist whose table is supported by Golden Plates. As one of the [presumably] few Mormons to actually see Barney’s work, I figure his interest is in symbology and self-contained systems, and that Mormonism is just another source, like football and Freemasonry, from which he constructs his own hermetic world. If I see Matthew before I speak, I guess I’ll finally ask him if he was actually raised in the church, or if being from Boise is enough to make anyone an honorary Latter Day Saint. 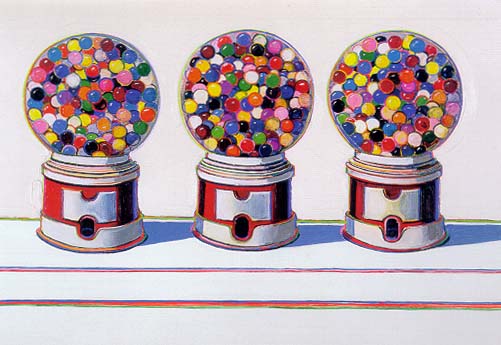 But my main focus is on the three major artists whose Mormon connection is uncontested–and for the most part, unconsidered: Wayne Thiebaud, Paul McCarthy, and La Monte Young.

[above: a trailer (?!) for a 2007-8 McCarthy exhibition in Ghent, maybe nsfw]
Typing those three names next to each other, I can’t think of a more dissimilar-seeming bunch. It seems the only thing they have in common is that they grew up Mormon in the West–Thiebaud in Los Angeles and Southern Utah, McCarthy in Salt Lake City, and Young in rural Idaho–and they all left the Church.
Also, they’re all old. Thiebaud and Young were both born in the Depression [I guess I should get used to saying “the last Depression”], and McCarthy was born in 1945. I tried and couldn’t come up with another prominent artist in the contemporary art world with Mormon connections or roots born since WWII. Though there are a few artists showing in New York these days with LDS connections–Lane Twitchell, my brother-in-law Benjamin Cottam–it does seem that there’s at least one missing generation.
I’ll be researching and posting a bit about this [dis]connection between Mormons & contemporary art over the next few weeks. If anyone has any thoughts, particularly if you want to out your favorite Baby Boomer artist as a Mormon, I hope you’ll drop me a line.