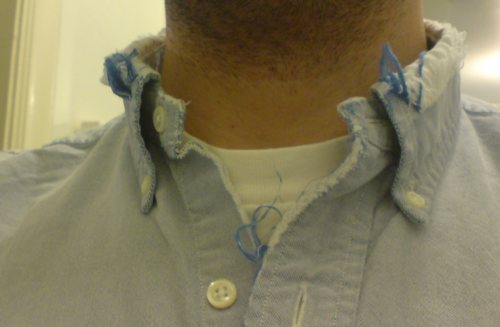 I just have get this out there, even though I know it drives Jean quietly crazy. I like wearing clothes with holes in them. I just do. Not cutouts, obviously, and not really rips, but stuff that wears out, wears through.
I don’t know when exactly it started, but I have some clues, and I suspect Rei Kawakubo bears a lot of the blame, even though my Comme des Garcons is in great shape. And it’s not entirely her fault, because I know I was holding onto at least one wonderful cashmere sweater I bought at the opening of Fellissimo on 56th street which got a hole in it the middle of the chest just a couple of years after I bought it, and that was before I bought The Shirt.
The Shirt is this blue CdG dress shirt that’s plain in every way, except that it has wrinkles permanently pressed into the lower half of the sleeves. There’s no better way to really get to know your dry cleaner–and to have him remember you–than to bring him a shirt that must be ironed in such a way that the wrinkles don’t disappear. It’s over ten years, and The Shirt is still properly wrinkled, and I think the conscious choice of buying and flaunting, frankly, a piece of disheveled clothing helped pull me over the line between not throwing out something [expensive/comfortable] I liked and wearing something with a hole in it, even if I looked like a hobo.
The Fellissimo sweater was a start, but the real foundation of my shredded wardrobe is a Ralph Lauren blue buttondown oxford shirt [pictured], which I wear with something akin to cheapskate preppy pride. It’s almost 20 years old, and the collar and cuffs have been ragged for at least the last 5-6 years. Everything else about the shirt is solid–oh wait, no, the left elbow wore through last fall, a result of my typing posture. It’s happened on a couple of great sweaters recently, too.
But I think the point the shirt makes [to me] is clear: I’m not going to replace this shirt. First off, there is no way in hell I’d buy a blue buttondown oxfordcloth shirt at Ralph Lauren today, in 2009. Ralph and I have both traveled too far, and it is just not the same thing. [And it’s not some Made in USA, not Sri Lanka problem, either. I think mine was made in Hong Kong. And it’s not like I’d ever buy a vintage shirt, shredded by someone else. Maybe if it was deadstock, but who’s got time to hunt down vanilla 1980’s Ralph Lauren shirts these days?]
In the last few months, I found an old white Ralph Lauren oxford in a box of clothes I’d packed and stored after business school. I put it into heavy rotation, and now it, too, is starting to fray along the collar.
One shirt with a scraggly collar might make people wonder–don’t worry–if I didn’t notice, or worse, maybe that’s the only shirt option I had. But put a cashmere sweater with a worn out elbow over it, and they’ll have to know it’s a choice. Not that they’ll know what to make of it.
The real holey clothes, then, are the cashmere sweaters. I have 30- and 40-year-old cashmere sweaters that look brand new, and I have 4-year-old sweaters that are falling apart. [Cashmere has really diminished since it went mass market a while back, and paying a lot for it is no guarantee of quality or durability. It’s really a shame.] But worn-through cashmere feels kind of nostalgic, I guess, not just too expensive or wasteful to toss out.
Up until World War II or so, dirt poor Japanese farmers used to save every scrap of fabric they could get their hands on, repairing and reusing indigo-dyed cotton and linen with great care. The Japanese term for worn out, boro boro, has since become its own aesthetic, and the more intricately patched and repatched the futon cover or jacket is, the more highly it’s prized.
I get it, but that’s not quite where I am yet, I think. For one thing, I haven’t figured out any strategy to mend any of my holey sweaters. They’re all too far gone for the French-American Reweaving Company to do anything about them, though they do excellent work repairing snags or the occasional moth hole. Really great work. But mending something or reworking it, or patching it, is a conscious move; it’s doing something about the holes instead of just letting them be. I think I’d rather be comfortable and content to let the clothes run their course.
But for the question of why I bring this up at all: I think wearing clothes with holes in them is going to be increasingly popular over the next couple of years, and I just want it to be clear that I was doing it first.