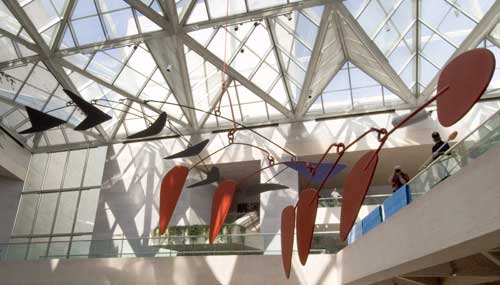 [via]
Or was it Blake Gopnik? Because Johnson’s review titled “From China, Iraq and Beyond, but Is It Art?” of the New Museum’s current show is so embarrassingly obtuse, it could almost be in the Washington Post.
At first, I assumed the headline was a fluke, the flip result of a lazy copy editor falling back on the most overrated, anti-intellectual straw man of the last hundred years of art world production.
And I was wrong. It’s the core of Johnson’s argument. The show, which I haven’t seen, is a series of works commissioned by three contemporary art museums–the New Museum, the MCA in Chicago, and the Hammer Museum in LA–under the Deutsche Bank-sponsored rubric of The Three M Project.
Here’s how it starts:

In recent years, museums have been getting into commissioning artists to create new works. It is a controversial practice. Some critics think that museums have enough to do just sorting out what already exists. Curators may argue that they are in the best position to identify promising artists and to make possible the creation of important works that might otherwise never be realized.
The problem is that you cannot know for sure what you’re going to get.

Johnson’s premise, false on its face, isn’t even the worst of it. Is he referring to any kind of site-specific installation or work created by an artist for a museum? Does Dan Flavin’s rotunda-filling installation that reopened the Guggenheim count? Siah Armajani’s bridge to the Walker Center? Calder’s mobile in the National Gallery? SFMoMA et al’s sponsorship of Christian Marclay’s Video Quartet? More than half of MoMA’s longrunning Projects series? I’m literally pulling examples out of the air right now. But in ten seconds, it feels like I’ve disproved Johnson’s claims of “recent” and “controversial,” and shown that the odds of “what you’re going to get” are not that terrible.
Again, having not seen the show, I have no opinion on the works myself. If Johnson’s point was that the works commissioned and seen there were bad, and that museums should leave the commissioning to corporations and collectors who know these things much better, that’d be fine. Idiotic and still demonstrably wrong, but fine. Instead, Johnson pulls out the big guns, the art critic’s WMD: saying that something is “not art.”
Of an installation about Urban China, a magazine edited by Jiang Jun which was included in the last Documenta, and which has been praised as “visionary” and which revolutionizes the perception of urbanism in China [a redundancy if ever there was one] through its innovative use of “raw graphic power”, Johnson sniffs: “All this is mildly informative but superficial. You won’t gain any very deep or revelatory insights about Chinese modernity. It isn’t really art, after all; it’s more like an overblown advertisement for the magazine.” [emphasis added on the wtf parts.] 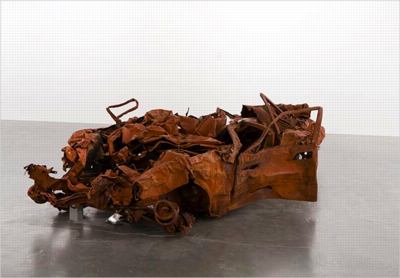 But the biggest critical bomb gets dropped, ironically, on the project by Turner Prize-winning artist Jeremy Deller, in which a stream of “guest experts” on the Iraq war–including veterans and Iraqis–are hosted in the gallery, which also contains the wreckage of car destroyed by a roadside bomb, to discuss their areas of expertise with museum visitors.

What Mr. Deller is doing may be useful therapy for our national post-traumatic stress. Is it art? You can call it an exercise in Relational Aesthetics, the conceptual art movement that takes social interaction as its medium and sociability as its goal. Otherwise there is no way to make any critical or evaluative judgment about it in artistic terms.
Mr. Deller’s project is not nothing. Its potential for doing good and raising consciousness is great. If it isn’t art, that is not a bad thing. It is what it is, as the title says, and what it is is an educational program. To call it art is to pretend it is something it isn’t. 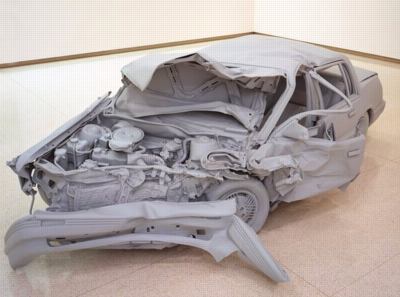 I don’t even know where to begin. Maybe I should feel sorry for Mr. Deller, who has clearly been misled by scurrilous legions of museum no-goodniks to think about something as irrelevant as the experience of visitors to his exhibition, and what they might take away from encountering his work. If only he’d painstakingly recreated that burned out car in fiberglass; if only he’d depicted the disasters of war in a series of aquatints, or perhaps a nice, moody painting; if only he’d interviewed his “experts” on camera, so he could project their giant, talking heads on the wall, or put them on a bunch of televisions in front of a bunch of chairs; or maybe he should have instructed his experts to read something, anything, maybe see if they can count to a million. He might have been onto something.
As for Mr. Johnson, I would suggest that if you’re an art critic who finds himself with “no way to make any critical or evaluative judgment” about a work by an artist awarded his country’s top art prize by its top art museum, which was commissioned and shown by three museums, which is compared to one of the most prominent art movements of the last fifteen years, a movement which was just the subject of a giant exhibition at another not insignificant museum in town, you might consider finding another beat.