Like everyone else in the country, I was glued to the screen September 11th, 1998, scrambling to download the massive Independent Counsel’s Report, aka the Kenneth Starr Report, from a still-scrawny Internet. I finally printed my copy in time for dinner, and my colleague from work and I pored over it at a sidewalk cafe near Dupont Circle, where we had traveled for a client meeting.
At the time, we were advising a group of entertainment and mall development companies on the creation of a startup, the purpose of which was to create the definitive platform for celebrity-driven retail. In other words, monetizable, industrial-scale product placement.
Which is why, while reading parts of the Starr Report out loud to each other, I had one of the lesser epiphanies of my life. I exclaimed to my colleague that this, the Kenneth Starr Report, was proof of the concept. After all, what brand was on every American’s mind that night? Exactly, Gap. the maker of Monica Lewinsky’s blue dress. I resolved right then to register the domain kennethstore.com as soon as I got back to my hotel. Which is what I did.
I proceeded to post the full text of the Starr Report, interspersed with illustrations and links–soon to be massive affiliate revenue producers, I’m sure–of the brands and products mentioned in the report: Gap, Ritz Carlton, Bic Pens. Actually, that was about it.
Ken Starr turned out to be no Bret Easton Ellis, and his report was no American Psycho. Also, I was too busy to ever format the pages for easier online reading, so there were two giant pages of text, each more than a hundred printed pages long. [The Library of Congress has formatted the IC Report quite nicely, I think, though there are no Amazon Associates links.] Also, neither Gap, nor Bic, nor much of anything else was really available for product-level linking and shopping in 1998, so while the concept was pure, and the execution wanting, the timing was also a bit early.
Oh, how times have changed. The New York Review of Books has published excerpts from a confidential 2007 report, ICRC Report on the Treatment of Fourteen “High Value Detainees” in CIA Custody, presented by the International Committee of the Red Cross to senior US intelligence officials over two years ago. The report methodically lays out the ICRC’s findings from interviews at Guantanamo Bay with presumed terrorist leaders, and declares that US imprisonment and interrogation tactics “constituted torture” and “cruel, inhuman or degrading treatment.” Mark Danner’s article on the report is an agonizing, outrage-inducing must-read.
But maybe there’s a silver lining, if not in terms moving actual product, at least in terms of brand awareness? Here’s Al Qaeda administrator Abu Zubaydah describing his first interrogations at a secret CIA base in Thailand:

I was given no solid food during the first two or three weeks, while sitting on the chair. I was only given Ensure [a nutrient supplement] and water to drink. At first the Ensure made me vomit, but this became less with time.

And then describing a later torture session, possibly in Afghanistan:

I was then made to sit on the floor with a black hood over my head until the next session of torture began. The room was always kept very cold.
This went on for approximately one week. During this time the whole procedure was repeated five times. On each occasion, apart from one, I was suffocated once or twice and was put in the vertical position on the bed in between. On one occasion the suffocation was repeated three times. I vomited each time I was put in the vertical position between the suffocation.
During that week I was not given any solid food. I was only given Ensure to drink. My head and beard were shaved everyday.
I collapsed and lost consciousness on several occasions. Eventually the torture was stopped by the intervention of the doctor.

Here’s Walid Bin Attash, a Yemeni involved with planning US embassy bombings in Africa and the attack on the USS Cole, describing his treatment after capture in 2003:

On arrival at the place of detention in Afghanistan I was stripped naked. I remained naked for the next two weeks. I was put in a cell measuring approximately [3 1/2 by 6 1/2 feet]. I was kept in a standing position, feet flat on the floor, but with my arms above my head and fixed with handcuffs and a chain to a metal bar running across the width of the cell. The cell was dark with no light, artificial or natural.
During the first two weeks I did not receive any food. I was only given Ensure and water to drink. A guard would come and hold the bottle for me while I drank…. The toilet consisted of a bucket in the cell…. I was not allowed to clean myself after using the bucket. Loud music was playing twenty-four hours each day throughout the three weeks I was there.

Khalid Shaikh Mohammed was captured in Pakistan. Here he is talking about his interrogation:

During the first month I was not provided with any food apart from on two occasions as a reward for perceived cooperation. I was given Ensure to drink every 4 hours. If I refused to drink then my mouth was forced open by the guard and it was poured down my throat by force…. At the time of my arrest I weighed 78kg. After one month in detention I weighed 60kg.

I can see it now: “How I lost 40 pounds–and kept it off!–thanks to Ensure and the CIA Diet!” 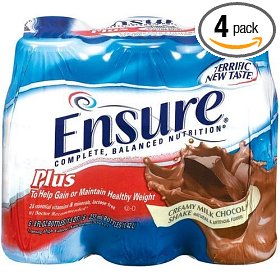