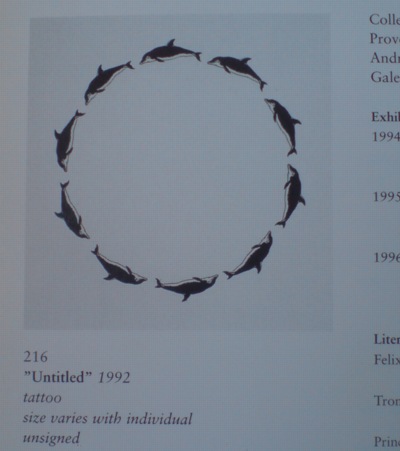 The closest I’ve ever come to getting a tattoo was this one, a 1992 work by Felix Gonzalez-Torres. The artist first showed this motif, a circle of dolphins that looks like it could have come from the border of an ancient greek kylix, in his first exhibition at Andrea Rosen Gallery in 1990. In that incarnation, it was a rub-on transfer on the wall, and it looked positively classical among the now-classic-Felix paper stacks.
For a moment, it seemed like the dolphins were becoming almost a logo for Felix. He embossed them in a small paper stack edition, and printed them on a limited edition t-shirt for a show in Madrid. Then in 1992, they made their last appearance in his work, as a tattoo, as part of a year-end group show at Air de Paris.
“Tattoo Collection” was conceived with Lawrence Weiner, and AdP’s Jennifer Flay invited 30 artists, including Carsten Holler, Vito Acconci, Philippe Parreno, to submit tattoo designs. Since then Flay, along with gallerists Rosen, Giles Dusein, and Daniel Buchholz, have added more than 200 submissions to the project. Sounds like it’s high time for a book. Or at least a slideshow.
I didn’t want it then, but when I was curating a year-end group show at Exit Art in 2000-2001, and was showing work that challenged the traditional collecting model, Felix’s tattoo was the top of my list. Andrea was very encouraging, but I ultimately decided not to get the piece because, ironically, I was worried I couldn’t maintain it properly.
And since then, I’ve been proved right. I can barely get to the gym a couple of times/week, and the spot I’d chosen–on the top center of my back–is starting to get a little hairy. If I’d been asked to loan the piece to a show somewhere, I’d have to get a trainer and a waxer both. Too much pressure.