I’m not interested in the so-called PC aspects of discussing hair loss. The parody of an apologetically sensitive term like “follicularly challenged” is still of a piece with the negative connotation baked into the term, “hair loss” itself. Same with the self-affirming bald pride nonsense of the “God only made a few perfect heads. The rest he covered with hair.” variety with gets cross-stitched onto too many pillows.
I’m interested in the seemingly universal, unquestioning acceptance of the hair loss [sic] paradigm. Now there’s obviously a strong, pro-bald paradigm at work as well, thanks in large part to Michael Jordan and his shaved head.
But when it’s discussed at all, the language and perception of hair loss is consistently negative. It’s a loss, not “scalp expansion.” “Hairlines recede,” foreheads don’t “advance.” At best, it’s a “problem” that guys “deal with” or “accept.” At worst, they deny it, fight it, hide it. Whether it’s a transplant, a toupee, or a combover, the results are always unsatisfactory, or at least aesthetically sub-optimal. And yet, does anyone ever say anything to the guy about his self-inflicted hair mistake? Not likely. Whether it’s someone else’s or our own, hair loss is usually slow enough that most people pretend it’s not happening and move on.
When I was a little boy, my paternal grandfather wore a toupee. It was thick, dark, and carefully styled–immediately recognizable to the most casual viewer. To me, the most remarkable thing about it was that he’d take it off when he got home, like a hat. He placed it upside-down on the coffee table, where it looked Meret Oppenheim-esque, a furry candy bowl with a strip of double-sided tape running down the center. I don’t remember anyone in our family or beyond ever talking about it, or even acknowledging its existence. What my grandfather’s motivations were for wearing it, and how it related to his perception of himself and the image he sought to project once he stepped out his door, I don’t know. I wish I did. 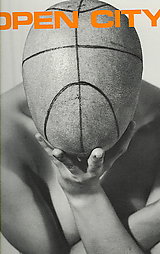 Actually, what I really wish was that I had the guts and presence of mind to take a conceptual, dispassionate, but engaged view of hair loss. Specifically, I wanted to get–OK, I wanted to see someone get–a tattoo of his hairline.
The idea came to me in 1995, soon after seeing Alix Lambert’s photograph of a tattooed head on the cover of Open City magazine. Wouldn’t it be awesome, I thought, for a guy to periodically trace a tatoo along his hairline as soon as he saw that it was changing? Add a new line maybe once or twice a year. As his hairline moved back, his tattoo would grow, and it would take on some kind of chronotopographical shape, somewhere between ripples in the sand and hollows in a sandstone cliff. Like carving notches in a growing kid’s door jamb, the tattoo would become a portable, integral memento of a passage of the man’s life.
Obviously, as my own tattoo-less head proves, there are complications to such a project. The generally negative perception of hair loss means that a guy’s denial and anxiety are strongest when it starts; you’re ignoring your hairline is shifting at the exact moment you’d need to start documenting the migration. You wash your face, and your muscle memory fails to take into account your extra forehead. But it works out because when you shampoo, you still try to lather up the top of your head the most, even though that’s not where most of your hair is anymore.
Tattoos have become far more popular and destigmatized since 1995, but facial/head tattoos still seem to carry a taboo that can affect acceptance among the mainstream culture. A guy with a bad hair transplant could become Vice-freaking-President in this country, but a guy with a conceptual scalp tattoo would be unemployable.
A corollary project would be a conceptual approach to hair transplants that rejects the default “naturalistic” aesthetic which is the unquestioned ideal. I remember seeing a guy in that first Barnes & Noble on Broadway, up from Zabar’s, an Indian/Asian guy with a vast, smooth head with a tiny fringe and like ten hair plugs on top. It’s like he was determined to get something done, but he only had money enough for a dozen plugs. And yet some doctor took his money and arranged his plugs in bowling pin formation on the top of his endlessly bald head.
But what if a guy laid out his hair transplants in a design? A spiral, a fan radiating from his now-invisible widow’s peak? A lightning bolt? The Nike Swoosh? Any one of the thousands of designs that guys get shaved into their fades every day on Astor Place–only in reverse and permanent?