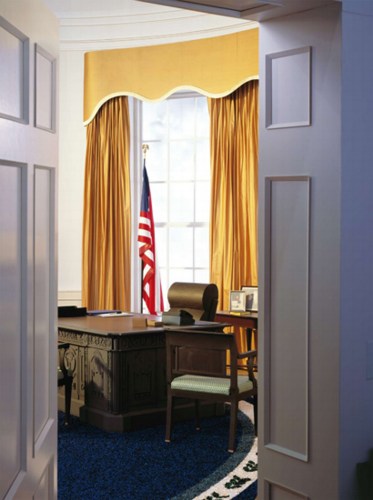 The result is a photographed stage set of a stage set used by the United States and its presidents to project and wield power. In a way, Demand has found his ideally reflexive subject. As such, if the NGA wanted to own a Demand, it’s the perfect suite.
But therein lies the disappointment: Demand is a minor academic conceptualist whose use of specially constructed sets to examine memory and to question photographic truth was long ago wrung dry. Ultimately Demand’s Oval Offices look like a kind of illustration — the exact sort of intentionally temporal decoration a magazine would logically commission to illustrate a story.

I’m not as down on Demand’s work as Tyler is, and I think there’s more to the questioning of “photographic truth” that he probably does. Demand’s works have always seemed to me to be about the construction of photographic likeness or verisimilitude, simulation, which is not at all the same as truth. In no small part, they’re about themselves as well, and the deadpan absurdity of their construction.
Sure, the “aha! it’s paper!” moment is fleeting at best, but that’s no different from any number of visually transformative conceptual artists, whether it’s Vic Muniz, James Turrell, Roni Horn, or Charles Ray. It should be a hook, an in to the work, not the end in itself, and I think Thomas clears that hurdle.
And I don’t mind that the photos were commissioned by the NY Times Magazine; and his use of the terms “illustration” and “decoration” are needlessly prescriptive and pejorative, especially coming so soon after Tyler’s own near-mandate that museums have the responsibility to be pursuing politically charged work. [Hold that thought.]
If there’s a problem for me with Demand’s Oval Office photos, it’s the way their “ideal reflexivity” seems so predictably perfect for the National Gallery. Washington is a city obsessed with itself and its own importance, and I can’t imagine how gigantic photos of the epicenter of power could be read here as anything other than adulatory. Actually, it’s not the reading so much as the institutional presentation that’s the problem.
Because context matters, and taken in the context of much of the Demand’s work, I’m not sure if these Oval Office photos are quite the monuments to itself Washington might think they are. 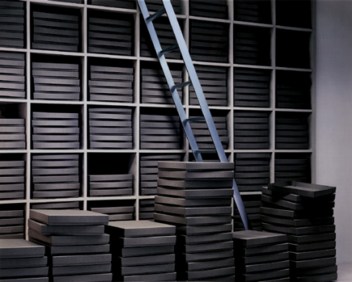 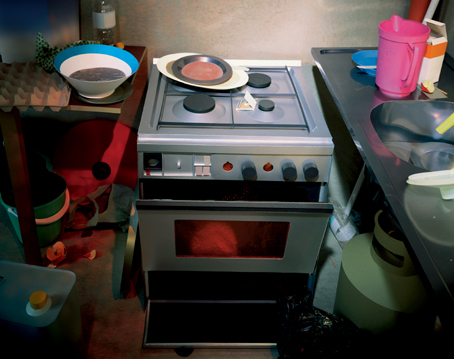 And his reassessment marches right on into the present. Kitchen, 2004 [above], was based on soldiers’ snapshots of the compound where Saddam Hussein was captured. Demand’s last show in New York, in 2007 consisted of re-creations from the artist’s own memory of investigative visits to the cramped offices of Niger’s embassy in Rome. The show was titled “Yellowcake,” and the embassy was the source of the obviously forged documents claiming that Iraq was seeking to build a nuclear bomb, the evidence that George W. Bush called the “smoking gun.” 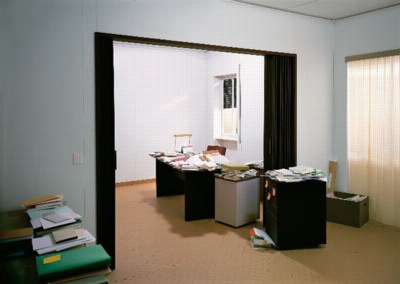 Are we connecting the dots yet? Demand’s Oval Office photos created in the last weeks of the Bush administration are not flat explorations of symbolic power; they’re re-creations of the scene of the crime. And now they’re hanging in the National Gallery. If we look at Demand’s photos and see nothing more than “The Presidential backlot…so familiar — it’s in news photographs nearly every day,” the failure of memory is ours.
Acquisition: Thomas Demand’s ‘Oval Office suite’ at NGA [man]
Thomas Demand, “Oval Office,” November 25 2008 – January 17 2009, Sprueth Magers [spruethmagers.com]
“Yellowcake,” November 3 – December 22 2007 at 303 Gallery [303gallery.com]