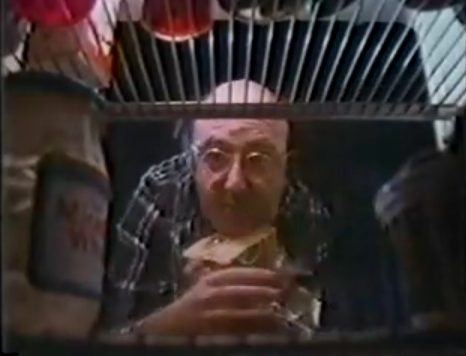 I guess the “and that’s half the battle!” view of MTV’s relentless pursuit of their demo is their success in completely baffling someone who’s aged out of it. I hadn’t watched MTV once in the last five years, at least, before we ended up watching the last half of Star Wars Sunday night, because there was literally–literally–nothing else to watch in our entire cable/HD/VOD/TiVO-verse.
And wow, besides the commentary bumpers with a hatin’ it Mark Hammill, and a cuh-razy Peter Mayhew, the greatest thing was the commercials. MTV has commercials for things I had no idea even had commercials. Brands who have a strategy, but don’t have enough money for a campaign, just a commercial. Which they run in MTV spot buys late at night.
Brands like Wonka, not Nerds–or not just Nerds, they want to get the umbrella brand in there, too. And Miracle Whip. As befits a commercial from the dweebiest condiment in history, Miracle Whip’s attempted ad makeover is an instant classic of the Gigantic Corporation Tries Way Too Hard To Look Way Too Edgy genre [cf. Intel, HP, Sprint, Zune]. The kind of commercials where you don’t know who to be embarrassed for more–the company with a hopelessly banal product to sell, the agency who’s stuck with the account, or the target demo, who you really, really, really hope is able to see through Cheap Fake Mayonnaise’s attempt to be their coolest friend.
So far, though, I can’t find the commercial to link to, probably because unlike all Kraft’s desirable customers, I’m not on Facebook. I’m left to read about the campaign, which is fine, because almost every word in BrandWeek’s recent article, Miracle Whip Whips Up Social App” makes me giddy with excitement for the future of the English language:

“What we’re trying to do with Miracle Whip is really get our target of 18 to 34 who grew up on brand. Many of them have just stopped using the category,” said Chris Kempczinski, svp of marketing for meals and enhancers at Kraft. “This campaign was about reengaging with 18- to 34-year-olds. The biggest place to go after them is in digital, and a big part of what they’re doing there is in social media.” 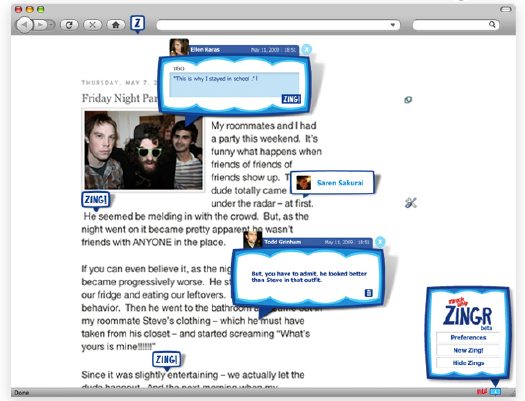 But that means the commercial I saw, with grungy hipsters gettin’ all Pop-Up Video with their Miracle Whip label-shaped thought balloons, was just a sop thrown to the mangy, three-legged dog of television. The real action is in digital, in social media. Which is why Miracle Whip created a Firefox extension/”app” called Zingr, which lets you annotate the web with Miracle Whip-lookin’ “Zings!” which it then shares for you while you social media in digital:

Miracle Whip hopes the use of Facebook Connect, which allows third-party developers to tap into a users’ social network, will spread Zingr (and the brand) far and wide. Leaving a “zing” on Kraft’s site, for example, triggers this message to a user’s Twitter network: “I just left a Zing! On brands.kraftfoods.com Check it out: http://tinyurl.com/oorhaa#Zing!”
The subtle branding was a tradeoff to make sure Zingr didn’t appear “too corporate,” Kempczinski said. But Miracle Whip will benefit from its own association with “zing,” he said. “If we can get ‘zing’ adopted as part of the digital vernacular, it will be tied into everything else we’re doing.”

Oh no, don’t worry, it’s really subtle, doesn’t look “‘too corporate'” at all. And it is indeed tied very well to everything else Kraft has been doing for their demo’s entire lives. In the Depression and the Baby Boom, Miracle Whip was about being a thrifty mayo substitute. But since at least 1979, when a chorus of hamburgers sang the enhancer’s “Zesty” praises, Z words have been central to Miracle Whip’s brand essence. In the 80’s it was “Zip” for your late-night sandwich binges, and even when America abandoned hamburgers for chicken in the 1990’s, we still “gotta have our Zip!”
Of course, by “we,” Kraft meant the now-grown, suburban Boomer schlubs in their ads, who were even then a caricature of anti-MTV lameness. But WTF, dude, that was over 18 years ago! Before some of Kraft’s awesome, new, social mediaing digital demo was even born! Now Miracle Whip is not all about consuming the category anymore. It’s all about Zing!ing and stuff; you know, part of the digital vernacular like you guys.

Miracle Whip Whips Up Social App” [brandweek]
Tangentially related, and from the same week, practically, as BrandWeek’s found poetry: “Hackers Can Sidejack Cookies” by Heather McHugh [newyorker.com]
Also, mad digital props to Harry Shearer Le Show. “Reading The Trades” is like the funniest parts of business school, for free, on the radio.