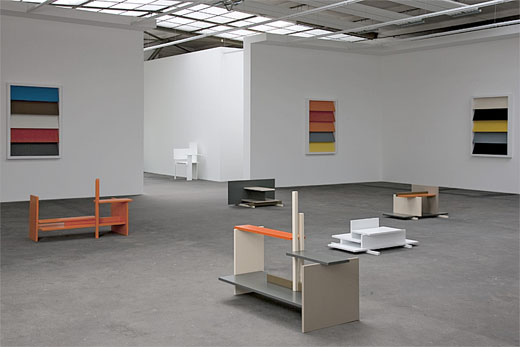 I’d seen this installation shot of Johannes Wohnseifer’s show at Johann Koenig in Berlin, but I couldn’t track down any details of the sculptures until now. But I see from Contemporary Art Daily that Koenig has finally posted some awesome detail images.
In an exploration of representation and tranformation/distortion through production, Wohnseifer has created a series of sculptures using the same nine components as Gerrit Rietveld’s 1923 Berliner Stuhl. Rietveld originally sold this chair as a build-it-yourself kit [the all-white example of the chair’s original configuration can be seen below, and in the background of the installation shot]. 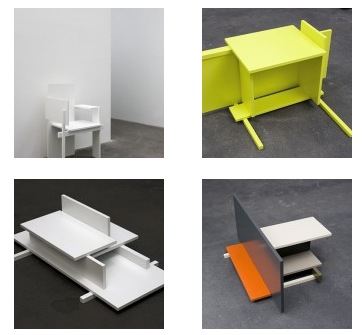 In each of his shelf-like but ultimately non-functional sculptures, Wohnseifer “plays with the idea of object ‘recycling,’ a widespread practice in non industrial countries, in which discarded materials with almost no more value are transformed into practical or also humorous products.” I guess “plays with” here means “doing the opposite,” since he transforms an unconventional-looking but functional chair into a definitionally non-practical object, a sculpture of almost classical abstract form.
Wohnseifer’s show closes tomorrow in Berlin