I can’t find any details online about this “Downtown Megastructures” image by Klaus Pinter and his colleagues in the Austrian architecture collaborative Haus-Rucker beyond what sokaris73 put in the flickr caption: it dates to 1971, and was apparently included in a 2000-1 show, “Radical Architecture,” which traveled from Dusseldorf and Koln to Villeurbanne. 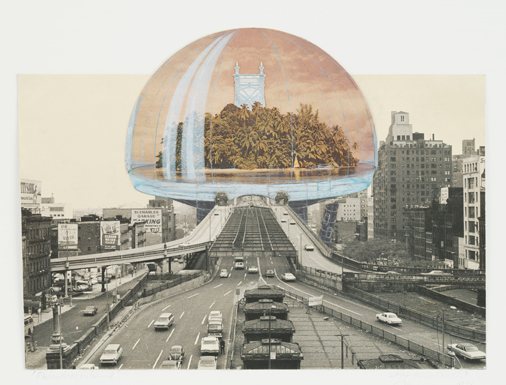 MoMA showed a similar-looking 1971 gouache/photo collage last year, though, in Andres Lepik’s “Dreamland: Architectural Experiments since the 1970s”. Titled Palmtree Island (Oasis), it’s a dome island [an Uptown Megastructure?] super-imposed on Nervi’s 1963 bus terminal at the George Washington Bridge.
Seems the 60’s and 70’s love affair with inflatable architecture was not just contained to America and the nude Stones fans at Ant Farm. In 1968, the Musee d’Art Moderne de la Ville de Paris showed “Structures Gonflables,” a giant show of blow-up design and architecture. Not big enough, though, if this photo of a dirigible blimp being stuffed into the museum is any indication: 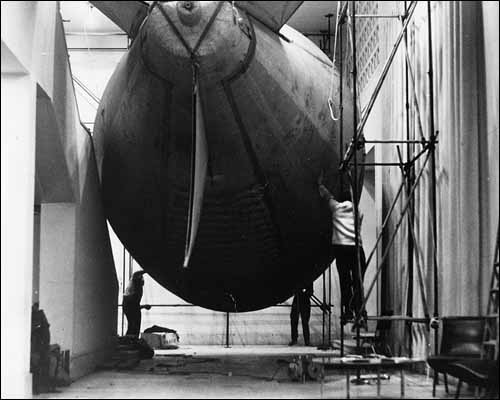 Coming at this balloon genre from the NASA point of view–not to mention the corporate and government world’s fair pavilions point of view–it’s beyond ironic that inflatable megastructures were often considered embodiments of anti-establishment, countercultural ideology. The Architectural League had a traveling exhibition on the subject in 1998, “The Inflatable Moment: Pneumatics and Protest in ’68,” which Metropolis Magazine wrote about at the time. Good stuff.