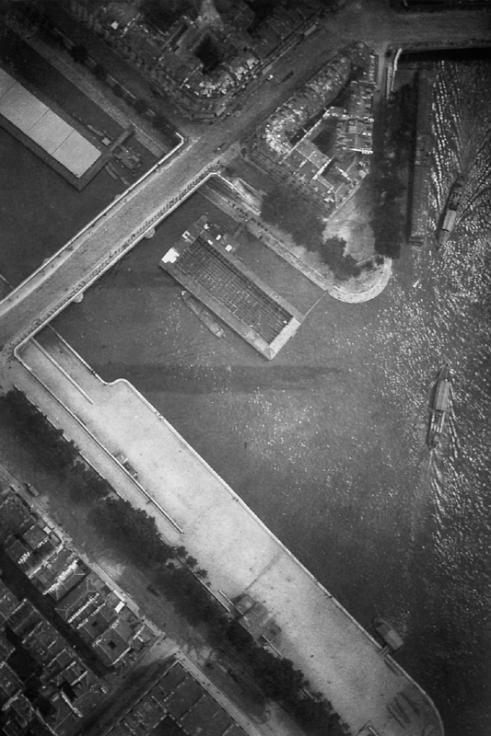 On June 19, 1885 Gaston Tissandier and Jacques Ducom set off in across Paris in a balloon. They were on a photo expedition, and managed to get seven shots. This one, of the pont Louis-Phillippe, at the western tip of the Ile St-Louis, was the most successful, in that it was nearly straight down. Though it was not the first aerial photo of Paris, it caused a sensation and was exhibited and reproduced widely for many years.
The photo historian Thierry Gervais wrote about it in a 2001 article in Etudes Photographique, “Un basculement du regard, Les débuts de la photographie aérienne 1855-1914”:

In 1885, Gaston Tissandier and Jacques Ducom know the objectives and results of aerial photographs obtained by Nadar. When they fly over the capital on June 19, their goal is clear: “After many attempts, it still needs to be demonstrated that the proofs obtained in a balloon may be as sharp as those taken on land in the ordinary conditions and resolve in a word completely the problem of free balloon photography.”
Beginning at the Auteuil aeronautical workshop, the 13 x 18 camera, known as a touriste, is set on the edge of the platform, with the lens oriented to the ground. The crossing of Paris is done from Porte d’Auteuil to Ménilmontant via a light wind from south-west which takes them up to Meaux. Seven photographs are made, five of the capital and two of the banlieue. If “all are good enough to be reported,” that of the Ile Saint-Louis holds particular attention, taken at 600 meters, this photograph is of a perpendicular sharpness that “leaves nothing to be desired.”
The photograph of Île Saint-Louis gained real notoriety. Mentioned in the columns of le Bulletin de la Société française de photographie, it was noted that “now that any party was able to shoot the Geography, Topography and Military Arts,” it will be reproduced on many occasions. It is published in an article in la Nature describing the expedition. In 1886, Gauthier Villars printed rotogravure and photoglyptie in the book of Tissandier titled, La Photographie en ballon. Two years later, Albert Londe chooses to illustrate his chapter on aerial photography in La Photographie moderne. In 1889, it appears alongside the tribute of Paul Nadar at the Exposition universelle.
But the diffusion also means that the photograph of the Ile Saint-Louis is one-of-a-kind in the late 1880s. Tissandier and Ducom’s experimentation was not followed by an intensive production of aerial photographs. Commandant Freiburg made several attempts to shoot from a balloon, but the military are confronted with a problem context. To be out of reach of projectiles, the balloon must be at least 5000 meters. Accordingly, the camera needed to be equipped with a telephoto lens to produce legible images. Having noticed, during the Exposition of 1889, the value of aerial photography for the strategy, the military focuses its attention on getting results with long lenses.

What strikes me is how little has changed in over 100 years, at least from this perspective.
Here’s the same shot today on Google Maps: 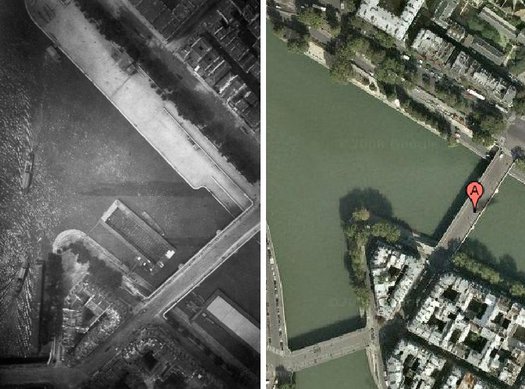