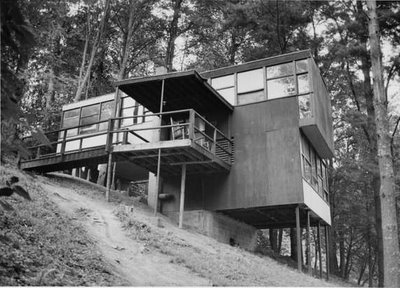 I stumbled across Lawrence Kocher and Albert Frey’s Aluminaire House last night while trying to figure out who built this house at Black Mountain College. It’s from the Charles Olson Research Collection at UConn, and was posted at An Ambitious Project Collapsing [get some permalinks there, buddy!]
Olson ran BMC from 1951 until its closing in 1956. But though it’s in the Olson BMC portfolio, the photo is credited to Frank Ballard, and is dated 1977, and is taken at a place called Camp Rochmont. So what gives?
Well, Camp Rochmont is actually Camp Rockmont, a non-denominational Christian boys camp, and it is Black Mountain College. When the school closed, 550 acres around Lake Eden was sold and turned into the camp. Another 60 acres full of BMC buildings is now Lake Eden Events, which hosts concerts and gatherings large and small.
As editor of The Architectural Record, A. Lawrence Kocher had recommended to BMC in the late 1930s that they collaborate with Walter Gropius and Marcel Breuer, fresh from the Bauhaus, to design a new modernist campus at Lake Eden, a failed, half-built resort complex. When fundraising fell through, Kocher himself began designing a building and planning out the rest of the site beginning in 1940. He was apparently in residence from 1940-43, teaching architecture and leading BMC’s trademark student building projects.
Of all the architects associated with BMC, Kocher seems the most likely architect for structure above. He designed two houses in 1940-41: one for the music teacher, the Viennese composer and early Schoenberg student Heinrich Jalowetz [now called the Sequoia Cottage, and available for $250/night, but not this year], and a 2-story house “for the kitchen staff and other black workers.” [It was still the segregated South, after all.
In The Arts at Black Mountain College, Mary Emma Harris described the Jalowetz house design as “based on four-by-eight-foot plywood panels,” a favorite material of Kocher’s. As the picture clearly shows, the house above is also designed around plywood sheet dimensions. And don’t the raised base and ribbon windows kind of give off an Aluminaire vibe? 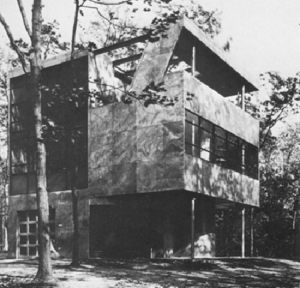 The only house on this map of the Lake Eden Campus I can map it to is #9, the Service House, which is indeed on the Rockmont side of the lake. 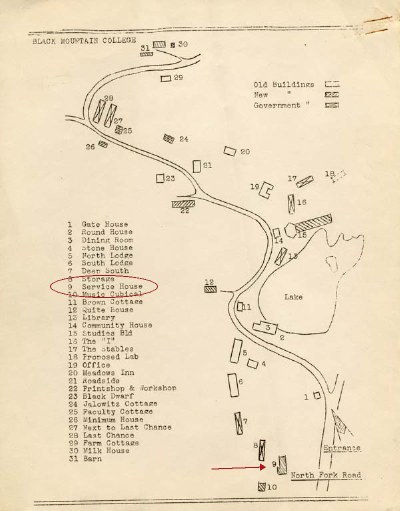 For all its seemingly awesome, modest simplicity, something called a Service House, built for staff in a far corner of BMC sounds unlikely to have much more documentation–and probably doesn’t appear too often in the typical photographic record of the day. I’m not too optimistic about finding out much more, but I’d love to be wrong.