Turns out the IPK is on the cover of one of Andy‘s favorite books, The Best Book Designs 1997, designed by Simon Davies: 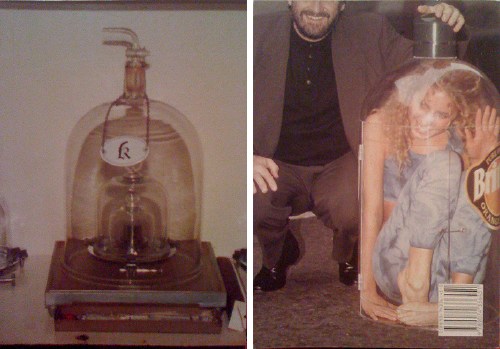 Also, from Metric Views, a blog of “commentary about the British measurement muddle,” a PDF of “Standard Kilogram Weights – A Story of Precision Fabrication,” an article by Johnson Mathey’s F.J. Smith, published in the 1973 issue of Platinum Metals Review. Of the 1889 First General Conference of Weights and Measures where the IPK was officially adopted, he wrote with metallurgic confidence:

The kilogram was redefined arbitrarily in terms of the new International Prototype Kilogram so that our present standard of mass has a permanence dependent only upon the stability of the iridium-platinum alloy.

Since then, Johnson Matthey “has been called upon regularly to supply” national prototypes and working standards, objects of extraordinary craftsmanship and exquisite, minimalist form, which will soon be obsolete.
Just like this original platinum kilogram standard, a sister to the Kilogramme des Archives, fabricated in 1795 by Marc Etienne Janety, a former goldsmith to the court at Versailles: 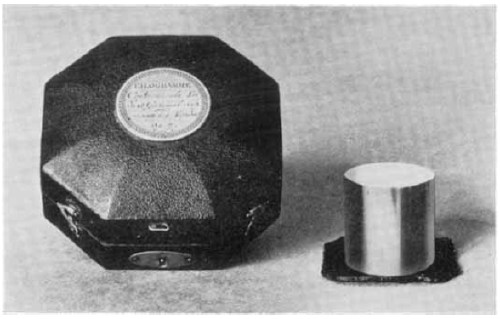 Similarly, historically speaking, a meter was measured against a one-meter rod–THE one-meter rod–first fabricated out of platinum, then, after 1889 executed in a globally distributed edition of 30 rods of iridium-platinum alloy, which:

Somewhere a portion of contemporary art has to exist as an example of what art and its context were meant to be. Somewhere, just as the platinum-iridium meter guarantees the tape measure, a strict measure must exist for the art of this time and place. Otherwise art is only show and monkey business.

Donald Judd wrote that about his project in Marfa in 1987. The meter was redefined in 1983as the distance traveled by light in a vacuum in 1/299,792,458th of a second. The show and monkey business continues undisturbed.