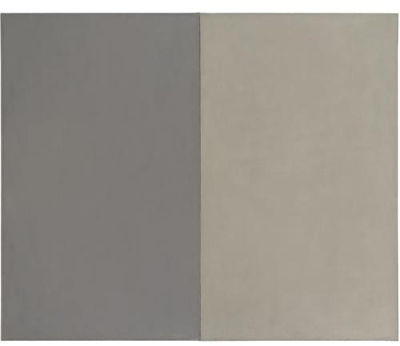 Ouch. As if things weren’t bad enough in the art world last October, a 1969 Brice Marden diptych titled Au Centre fell off the brackets in its travel crate while in transit from Moscow to New York. The fall apparently went unnoticed until the painting arrived, which meant its fragile oil and beeswax surface jostled and rubbed against the inside of the crate all the way home. It was destroyed, and now after paying out the $3 million claim, the insurer AXA Art is suing the hell out of everyone who ever touched the painting or the crate. [The case just moved to federal court in Manhattan after a couple of months in NY State Supreme Court.]
The owner is/was Gagosian Gallery. According to the NY Post, the painting was en route to Manhattan to be sold at Sotheby’s. Which is odd. The original court filings had Au Centre leaving Moscow on October 9, 2008. [Actually, the date is listed as October 9, 2009. Which, if it were true, means AXA could just make sure someone’s properly escorting the painting in the future, and there’d be no trouble at all.] Gagosian had just opened a major show in Moscow a couple of weeks before, a nearly encyclopedic survey of contemporary art. Which did not, though, officially include the Marden. So maybe it was there for a back room showing, or as extra inventory? Who knows?
But we do know that the crate makers named in the suit are from Brooklyn. And the painting had last been seen in New York–at Sotheby’s. Despite its general awesomeness as an early Marden, Au Centre was a notable disappointment in the fall 2006 contemporary auction. The painting had both a high estimate [$3.8-4.5 million] and a guarantee [?], but it went unsold.
And it’s not so clear that Larry just snapped it up on the rebound, either. The painting is listed as coming directly from dealer Yvon Lambert, who had purchased it from his own 1969 show in Paris of Marden’s work. Yet Artforum seems to imply in their coverage of the sale that Bob Mnuchin was the “constipated”-looking seller.
Maybe he was the buyer. In 2006, Sotheby’s had yet to institute a disclosure policy for third-party guarantees, or as they eventually called them, “irrevocable bids.” In the late boom, third-party guarantees were a popular, if dodgy way for auction houses to extend guarantees to sellers while mitigating their own risk. But they were also a great way to reward big collectors and financiers, who reaped a significant portion of the surplus if a work sold beyond the guaranteed price. In other words, the guarantor was paid hundreds of thousands or millions of dollars not to buy the work. And they provided the sure public appearance of a sale, preventing the work from acquiring the aura of, uh, damaged goods.
Though I guess that didn’t happen here. And somehow Larry gets an early Marden for $3 million. In New York at the beginning of 2007. Given that auction history, it seems odd to me that in the Fall of 2008, with the art market bubble popping, Gagosian would really have been planning to put the painting back into play at Sotheby’s New York.