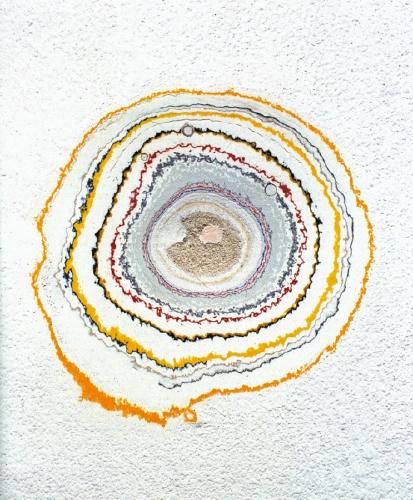 And speaking of “The Quick And The Dead,” I swear I’ve seen a nearly identical piece to Pierre Huyghe’s Timekeeper, 1999, before.
I thought it was at the 1995 Whitney Biennial, on the east wall of the central gallery, opposite the Ellen Gallagher paintings. Only instead of sanding down the layers of paint on the gallery wall to reveal the space’s history like tree rings, the Whitney version was chiseled or routed out, leaving a smooth, beveled edge.
Did it make a shape like a striated, inverted Mayan pyramid? Or was it more of a trench, like a miniature LA River running horizontally across the wall? Was it by Lawrence Weiner? Am I right on the wall, but wrong on the show and date?