So first the big news about the Pebble Beach Pollock Caper: did I call it or what? The Monterey Herald reports from the Sheriff’s Dept. press conference today that Angelo Amadio and Ralph Kennaugh are now being considered suspects in, well, if it’s not an actual $80 million art theft, it’s some kind of “criminal enterprise.” They’ve hired a defense attorney, but they have not, as yet, provided the police with any actual documentation that proves the supposedly stolen works even exist.
David St. John says it exists, though. He’s supposedly the collectors’ insurance broker [and his ex-wife is listed as counsel for Amadio’s newly incorporated investment company, so a really arm’s length guy. From the SF Chronicle:

David St. John said he had seen his clients’ most valuable painting, an untitled Pollock that police were told was worth $20 million.
“There have been very few owners – three or four as I can trace,” Amadio said. “It’s known amongst Pollock collectors, I think.”

Ah, now we’re getting somewhere. A 4×7-foot Pollock which has traded hands three or four times in 50+ years, yet has never been sold or exhibited publicly. A painting which is not in the four-volume, 1978 catalogue raisonne or the supplement, yet is “known amongst Pollock collectors,” Amadio “thinks.”
I guess I’ve just been spending too much time trying to rally all the Warhol collectors to Find The Warhols! to do much Pollock collector outreach. Could someone who’s on Facebook contact the Pollock Collectors Group for me and tell them to spill the beans?
UPDATE: Watch the raw feed of the Sheriff’s bemused press conference! [kcra.com]
Also, the Google Map and the real estate listing for the scene of the as-yet-unspecified crime: $4.3m, not $5m, and flooded with western light. Good thing the prints were all rolled up! 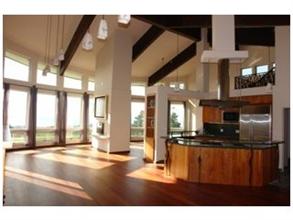