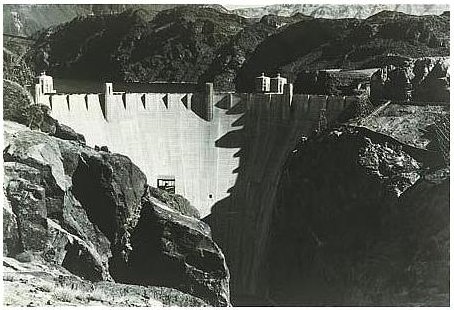 News that the Amon Carter Museum in Fort Worth acquired a painting by Charles Sheeler of the Boulder Dam sent me looking for more, and guess what I found? Sheeler’s painting is one of six commissioned in 1938 by Fortune Magazine for a series on “American industrial power.” He also made at least 20 photos of the dam, including the print above, which was sold by The Museum of Modern Art in a large sale of photography held at Sotheby’s in 2001.
But why stop at pushing the deaccession button, when there’s the accession, curatorial stunt, war, and government involvement in the arts buttons to be pushed, too? From the lot description:

This photograph was one of the prize-winning images in the Museum’s Image of Freedom contest and exhibition, in which photographers were asked to ‘interpret a facet of the American spirit.’ Of the 799 photographs entered, 95 were selected as prize- winners and bought by the Museum for $25 each. The photographer’s identities were concealed while their entries were reviewed by a judging panel consisting of Ansel Adams, Beaumont and Nancy Newhall, Monroe Wheeler, James Thrall Soby, David McAlpin, Alfred Barr, Jr., and A. Hyatt Mayor.

Now truth be told, that’s a pretty unimpeachable panel, as far as the history of photography goes. Adams and Barr, you know. Beaumont Newhall helped form MoMA’s photography department under trustee/collector McAlpin’s watch; Nancy Newhall was an influential critic and close collaborator with Adams and Brett Weston; Wheeler and Soby were both senior officials and/or curators at the Modern as well as trustees; and Mayor was a pioneering print curator at the Met. Still, an anonymous contest where the prize is $25 and entry of your work into the Modern’s collection? Would any museum try such a thing today? 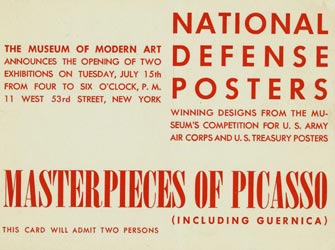 And what about this whole Image of Freedom competition itself? The contest, organized in conjunction with the US Office of Civilian Defense, took place in 1941, before the country actually entered WWII. [The exhibition opened in October, hot on the heels of the National Defense Poster Competition show, part of a double bill with the debut of Picasso’s Guernica (above). The goal of this contest was to “urge artists to create posters that would encourage citizens to support the war effort through personal and economic commitment.” The posters later appeared in Army recruiting offices and on billboards around the country.]
In the invitation, photographers were asked, “What, to you, most deeply signifies America? Can you compress it into a few photographic images?” and charged to capture “the spirit of our thoughts, our ways, our homes, our jobs.” Which doesn’t exactly sound the same as our awesome dams, our giant parades, and our suspension bridges [that’s one of Brett Weston’s award-winners above, which was also sold at Sotheby’s]. 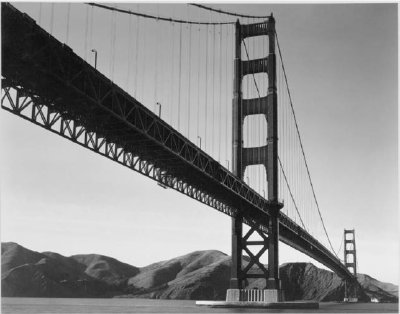 In his review for Photo Notes, Walter Rosenblum found the Images of Freedom didn’t show enough of The People:

Isn’t the Image of Freedom something bigger, something more vital [than the natural beauty of the country]? Isn’t it that very human quality that differentiates a Nazi Storm trooper from a real American. Isn’t it that which is reflected in the workers of Lewis Hine, the people who built the Empire State building, the oppressed who come to this country for refuge?
Isn’t it the farmer of Dorothea Lange, the sharecropper’s brave wife? Isn’t it the complete body of work of the F. S. A.? Isn’t it the worker in the mill, in the shop, in the factory? The teacher who can teach as he pleases, without following a regimented text book drawn up by the Nazis? Isn’t it reflected in these people who have a stake in our democracy that they are proud of and are willing to fight for to defend?
Isn’t it the people who organized Ford at the cost of their lives, the American boys who went to Spain to stop the fascist invader before he was able to spread his power. Isn’t it the air raid warden in the city streets, who stands with his head so high, because he is doing his bit for his country? Isn’t it that American, who after a hard day’s work, visits a Red Cross Station in order to donate his blood to the cause of democracy, to that cause which will give us a better chance of retaining our own freedom.

Rosenblum namechecks a few of his favorite Working Man images from the show. Which is all fine, I suppose, though all that union talk sounds like a lot of Ruskie happytalk to me. 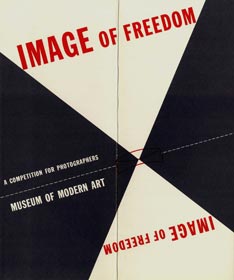 But that discussion still ignores the show’s remarkably problematic [or not?] core assumption, namely that a museum–not just a museum, The Museum–should be organizing exhibits for the government and rallying artists to support preparations for war. Or maybe it just baffles me, living as I do in a moment of history where jingoist wingnuts see an NEA conference call as evidence that an army of brainwashing artists is about to enslave America under Obama’s tryannical thumb–and where self-important critics make naive, grand pronouncements on the sanctity of Art.
How does MoMA account for its own deep, involved history of colloboration with the government to produce exhibitions and to promote The American Way or whatever? The short answer is with careful ambivalence that tries to distinguish, at least in retrospect, the independently artistic from the overtly propagandistic. Here’s the introduction to an exhibition in the Museum Archive called, “The Museum and The War Effort: Artistic Freedom and Reporting for ‘The Cause,'” organized last year by two folks in the Archive, Miriam Gianni and MacKenzie Bennett:

In the United States in the 1930s and the early 1940s, many people believed that modern art could pave a pathway to democracy. Numerous exhibitions at The Museum of Modern Art were produced in collaboration with the United States government. The Museum also continued to organize shows that were aligned with its mission to exhibit the best of recent works of art.
Artists in the United States, Europe, and Asia used art as a medium through which they could voice their opinions about political regimes, war, and social turmoil. From 1938 onward, a variety of compelling exhibitions featuring works produced by artists motivated by wartime experiences were organized at the Museum. In Luis Quintanilla: An Exhibition of Drawings of the War in Spain, Art from Fighting China, and Yank Illustrates the War, MoMA provided its public with a glimpse into war-torn Europe and Asia and an inside look at the difficulties of military life.
In addition to exhibiting war-focused artworks, the Museum played an active role in seeking out artists to assist in government campaigns for the war effort. Staff from the Museum acted as liaisons between government agencies and artists. In 1942 James Thrall Soby became director of the Museum’s Armed Services Program, which functioned as an intermediary between government agencies and the Museum. Under its auspices, exhibition and film programs designed to rally support for the war and solidify America’s image as a society interested in spreading democracy and freedom were added to MoMA’s roster.

Weston’s images were included in a collection survey in 1944, but Sheeler’s photo was apparently never exhibited again by the Museum. It makes me wonder how other Image of Freedom winners fared after the war, artistically speaking, I mean. Maybe despite its long history as an official partner of government propaganda, the Modern has managed to keep its independent artistic and curatorial efforts clear of interference from The Man. Just like how a fine art photographer keeps her commercial work separate from her art.
Or maybe that’s exactly what they want you to think.