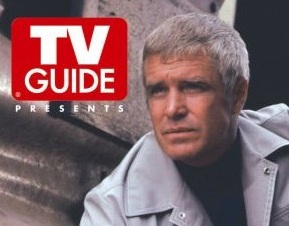 I’m really busy Finding The Warhols!, but when the Palm Beach Pollock heist went down, and no one in the crime beat media seemed to know enough about art to spot the inconsistencies and implausibilities in collector/dealer/boytoy Angelo Amadio’s claims, I couldn’t remain silent.
[The biggest red flag, of course, is the couple’s claim to have bought or been given an authenticated but secret painting by Jackson Pollock in 2001. But let’s set that aside for a moment.]
In all his early statements, Amadio described the stolen works as “paintings.” I was the first and only one to point out that the works in the photos were not paintings, but were actually prints: the Miros were lithographs, and the Rembrandt was an etching. As recently as Wednesday, they were being reported as “paintings and drawings.”
Now it seems Amadio has agreed with me.
In advance of a press conference scheduled for today, Amadio & co. gave the Monterey County Herald a list of the stolen works, “which include prints by Rembrandt, Renoir and Miro.”
Just to be clear: no serious collector, no one who actually owns and handles art, and certainly no one who has been in the “wholesale art business” and authenticating Pollocks for years as Amadio claims would call a print a painting. And they certainly wouldn’t do it for Rembrandt, whose paintings and etchings are such completely different physical objects. It’d be like calling a piece of paper a book, or a purse a suitcase. It just makes no sense.
Meanwhile, in other Telling Different Things To Different People news, the LA Times describes Amadio as A law student who clerks for attorney Vicki St. John. Which may be true! Life’s complicated, and we all have many different hats and usernames.
Here’s what he told the SF Chronicle earlier this week:

Amadio said he is chief executive of Alternative Asset Investments Inc., which he described as a company that deals with artwork. He also said he is a law student, but would not say where.

Also this, “St. John’s ex-wife is Vicki St. John, who is listed as the attorney for Alternative Asset Investments, Amadio’s company, on the firm’s Web site.”
And from the Herald: “Vicki St. John, an attorney representing Angelo Benjamin Amadio and Dr. Ralph Kennaugh…”
So St. John is Amadio’s “boss,” his employee, and/or his lawyer. And she’s also an ex-wife? Yes, of David St. John, the couple’s insurance broker, who is the only other person named so far who claims to have seen the art. In describing the coming “rebuttal press conference” [Amadio & co’s term], the LA Times said the collectors’ proof would include “a statement from an insurance agent who specializes in art.”
So I guess that means the statement will not come from David R. St. John, then, because he apparently specializes in auto, health and life insurance. One of Tulsa’s most upstanding independent insurance brokers, I’m sure. 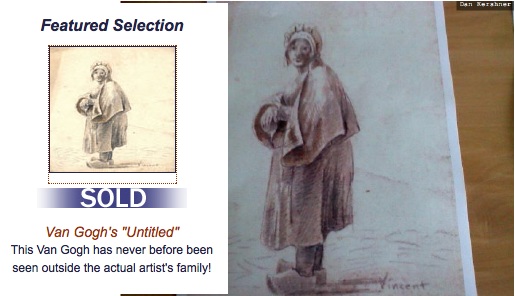 UPDATE: I didn’t notice that Wednesday, the Herald put a date on the Pollock: 1944. That should narrow it down.
One work that hasn’t gotten any real attention is the Van Gogh. I know, right? Was it the drawing of an old woman [signed “Vincent”] that Amadio showed to KSBW last week? [above, right] Because according to the Internet Archive version of Art Etoile [above, left], Amadio & Kennaugh’s defunct “wholesale art” business website, that drawing was “SOLD” for $1.5 million by April 2004. It was described as a “Van Gogh [that] has never before been seen outside the actual artist’s family!” What incredible art historical detective skills these guys must have, finding unknown Van Goghs and Pollocks everywhere! Maybe they can help–you guessed it–Find The Warhols!