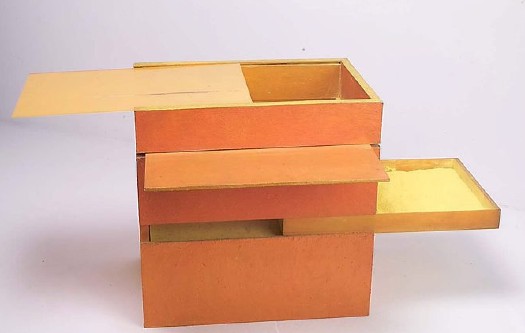 Unbelievable. The Brazilian artist Helio Oiticica refused to sell his work; his estate, the Projecto Helio Oiticica, held an estimated 95% of his entire output when he died in 1980. The Museum of Fine Arts in Houston had a truly spectacular, history-shaking show of Oiticica’s work in 2007, which traveled to the Tate. Roberta Smith said in the Times,

This show is like a large stone dropped into the calm waters of European-American art history. With its thick, lavishly illustrated catalog, it presents an enormously productive artist, writer and thinker whose work effortlessly spans the gap between Modern and Postmodern, Minimal and Post-Minimal. Reflecting inspirations from Mondrian to the samba music of Rio de Janeiro’s favelas (slums), it also bridges first- and third-world cultures in a way that has seldom been equaled.

Now O Globo reports [via artforum] that a fire in Oiticica’s brother’s house has destroyed “an estimated 90%” of the PHO’s holdings. Some installations and conceptual projects designed to be recreated are fine, of course, but his paintings and sculptures, including his incredible bolides [above], minimalist experiments in experiential color from the early 60s that remind me of Anne Truitt’s genre-breaking works, are gone.
Apparently, PHO–which is controlled by the artist’s two younger brothers–was in an ongoing dispute with the municipality of Rio over the government’s inadequate storage conditions and late exhibition payments for the work. As a result, PHO removed the work to the house–where it just burned up. This just tears me up inside to think about it.
A multi-year digitization project for Oiticica’s work and prodigious archives was nearly complete, though, and presumably the 7-volume catalogue raisonne will keep the artist’s seminal ideas in circulation. Without the works themselves, though, Oiticica could end up a digital ghost, haunting artists and art historians of the future.
update: O Globo has photos of the aftermath. The loss may be closer to 75%.
The exhibition catalogue for the MFAH show: Hélio Oiticica: The Body of Color [amazon]