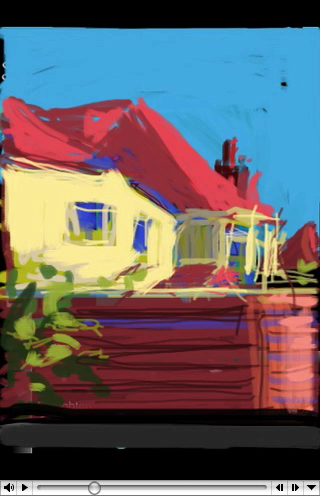 Lawrence Weschler narrates a slideshow of David Hockney’s iPhone/Brushes drawings for the NY Review of Books:

When he finishes one of these drawings, he sends it out into the world…
There’s about 15, 20 people, and he assumes that we send them on to other people if we like it.
One of the things that’s quite fascinating in this whole thing is that we have the original on our iPhone. Which is to say there’s no version that’s higher resolution than the one we have; we all have the same resolution. The ones you’re looking at right now are originals as well.

Technically, there are images and .brushes files. If you send Brushes images as .brushes files, their creation can be replayed like an animated movie. [It makes me interested to try to animate a Brushes work the way, say, William Kentridge does, treating the buildup of strokes as a narrative device. But that’s not the point right now.] But if Hockney just sends out images, then his friends have a file that is distinct and different from the “original,” and all its embedded generative data. It is certainly different from the image embedded in a slideshow.
But that’s a highly particular assumption of originality that pertains to this app. Weschler’s assumption that a copy is lower-resolution than an original has much broader implications. It’s an assumption that’s hardcoded into almost all our image reproduction technology, as I inadvertently discovered when I began trying to accurately reproduce the 300×404 pixels of 300×404, after Untitled (Cowboy) 2003 by Richard Prince, the original of which is a .jpg file.
An image invisibly but irrevocably sheds a phenomenal amount of data and time- and process-related content when it goes from .brushes file to .png or jpg. In precisely the opposite way, transferring 300×404 to anything other than the jpg it is turns out to involve the addition of an incredible amount of data, via interpolation, upgrading and smoothing and blending algorithms. Those original 121,200 pixels get drowned out completely. 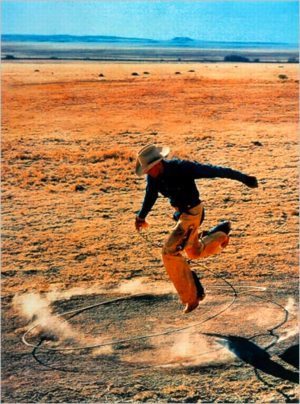