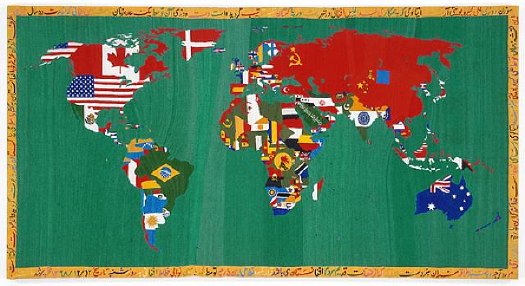 I understand the back to basics theme that Holland Cotter’s working with in his Chelsea walkaround. But I’m baffled by the retrograde sniping about authorship in his non-review of Alighiero e Boetti’s maps:

Gladstone on West 21st Street has pulled together a mini-retrospective of “Mappa” or “Map” pieces by — or at least associated with — the Italian artist Alighiero e Boetti. He did the prototype in 1969 when he hand-colored a printed world map, filling in each country with an image of its flag. Two years later, in Afghanistan, he commissioned local women to embroider the same image, and renewed the commissions, which chart the reshaping of national borders over a quarter of a century, until his death in 1994. The show is most striking for questions it raises about collaboration versus exploitation, though there’s no question that as an exercise in global consciousness the series was ahead of its day.

Did Zwirner’s show of fluorescent lights “associated with” Flavin raise striking questions “about collaboration versus exploitation,” too? Or does he get a pass for deciding to leave the union labels on his factory-made fixtures?
Seriously, NY Times, why not just save a buck and republish Hilton Kramer’s reviews of the original shows?