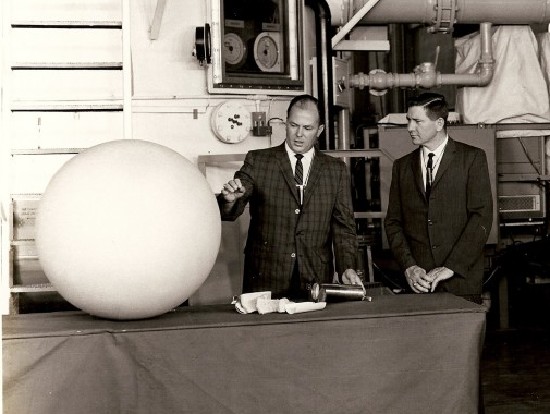 A periodic check on eBay for Project Echo-related material turned up this photo from April 29, 1963: “NASA-MERCURY, HANGAR 5, CCMTA – Left to Right – William Carmines and William Armstrong of NASA describe the balloon experiment for the MA-9 mission.”
MA-9 was Mercury-Atlas 9, the last of the first series of manned US space flights. L. Gordon Cooper was the first American to spend more than a day in space. “The balloon experiment” was designed to measure atmospheric drag at various altitudes by inflating a 30-inch balloon behind the orbiter, which would trail at the end of a 100-ft nylon cable. Cooper was also supposed to take photos of the tethered balloon to test visibility in space.

Objective: The objective of the visual portion of the experiment is to evaluate the relative merit of various colors for optimum visibility in space at short and long ranges.
…
The test device consists of a 30-inch diameter balloon constructed of 30 gores of 1/2 mil Mylar – 1/2 mil aluminum foil material. It will be divided into five equal size lunes composed of uncolored aluminum foil, yellow and orange Day-Glo, flat white paint, and phosphorescent paint (figure 1, below). 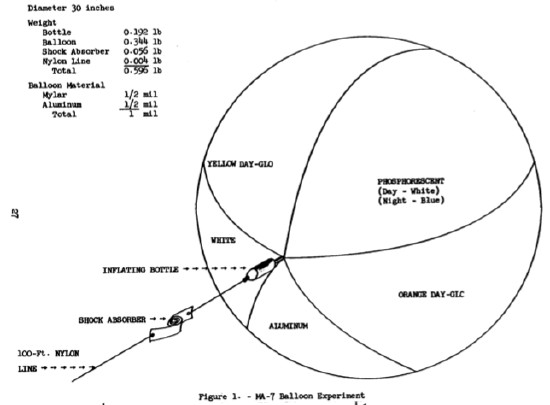 …
The balloon, [inflating] bottle, and shock absorber will be packaged between two balsa half cylinder shells in a metal cylinder which si three inches in diameter and seven and one-half inches long. It will be mounted in the Mercury spacecraft antenna fairing. [The assembly would be ejected out of a spring-loaded door by the firing of an electric squib.]
…
A small quantity of 0.250-inch diameter Mylar disks will be placed in the folds of the balloon. The Mylar is backed by aluminum foil on one side and is coated with Claray (diffuse-reflecting) compound on the other. These will disperse as the balloon inflates.

So, small explosion, burst of mylar confetti, and deployment of beach ball-like balloon on the end of a 100-ft cord. Then photos of the whole thing. Sounds awesome.
Unfortunately, the MA-7 balloon tore on inflation, and only the aluminum and orange Day-Glo lunes were visible. The orange was so much brighter, that the MA-9 balloon, above, was painted entirely in orange. Unfortunately again, the MA-9 balloon failed to deploy at all.
Those balloons would look nicer in color.