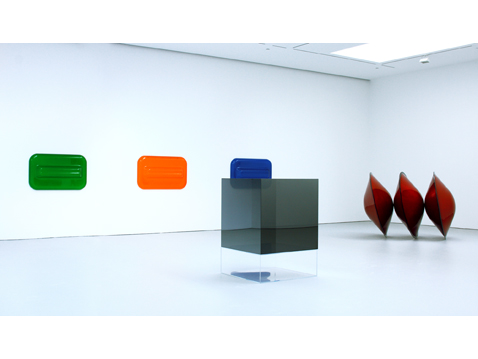 Last month I watched the essentially sculptural process of designing and making fiberglass Eames chairs, and I wondered “how design and art ever stayed separate in those days.”
The answer, of course, was that it didn’t. David Zwirner just opened “Primary Atmospheres: Works from California 1960-1970,” the kind of show I’d totally expect to see in a museum [1] [2]. From the press release:

While most of the artworks included in the exhibition can be referred to as minimal in form, their seductive surfaces, often madeout of nontraditional materials, and their luminescent use of color and light characterize them as uniquely Southern Californian.
…
The works on view capture some of the more specific aesthetic qualities of the Los Angeles area during the1960s, where certain cutting-edge industrial materials and technologies were being developed at that time. Many of the artists employed unconventional materials to create complex, highly-finished and meticulous objects that have become associated with the so-called “Finish Fetish” aesthetic.
These artists were also influenced by the industrial paints applied to the surfaces of surfboards and cars, as well as the plastics of the aerospace industry.

Industrial and commercial materials and processes, surfboards, cars, signs, aerospace. As awesome and long-overdue as Zwirner’s show is, it sounds like there’s a lot more about the relationship of postwar art and design to be discovered, written about, and shown. So hop to.
Primary Atmospheres: Works from California 1960-1970, through Feb. 6, 2010 [davidzwirner.com]
16miles reports beautifully from the scene of the opening [16miles.com]
image above: works by Craig Kaufmann in vacuum-formed plexi; Larry Bell in mineral coated glass; and De Wain Valentine in fiberglass-reinforced polyester, via zwirner.
[1] In fact, it feels like a slice of the Pompidou’s much larger 2006 survey of Los Angeles, hopefully without the negligent destruction of the non-traditionally constructed art. Several of these artists were also in PS1’s odd “1969” show last year, so not quite as unexposed as the press release implies.
[2] Zwirner’s last Flavin show was the same museum-quality, but not to be found in a museum. And then there was the Flavin Green Gallery and Kaprow shows at Hauser & Wirth. How are there not more museums in town doing small-to-medium-sized, historical contemporary shows like this? The exhibition equivalent of an essay instead of a book? It seems like such a free way to work and think. PS1 is the closest I can think of, though I’m always ready to believe I just don’t get out enough.