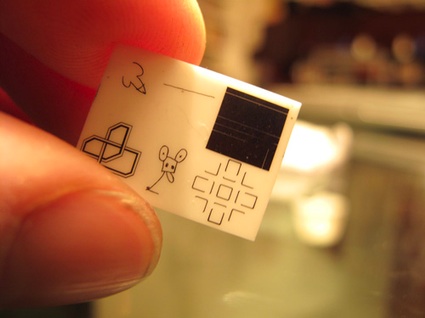 Regular readers of greg.org will recall the Moon Museum. Initiated by the artist Frosty Myers–who know prefers to be called Forrest Myers, I take it–the Moon Museum was the first art on the moon, a tiny ceramic chip containing etchings by six artists, which was secretly attached to the lunar landing module for the Apollo 12 mission in 1969.
When I posted about the Moon Museum in 2008, I was happy to even find a grainy picture of the entire thing. Andy Warhol’s contribution, a graffiti-style doodle of a penis, was deemed unfit to print by the NY Times when the art project’s existence was first revealed.
Now Reg at We Make Money Not Art has posted a much nicer, color photo of the chip from Myers himself. It was featured in an exhibition of “art of extreme environments” in Paris last fall. She actually notes that “a few were made,” which is awesome. That means they might be–or become–available some day. At least one other example of the Moon Museum was, in fact, given to MoMA in 1993 by Ruth Waldhauer. It’s described as a “tantalum nitride film on ceramic wafer.” This warrants further inquiry.