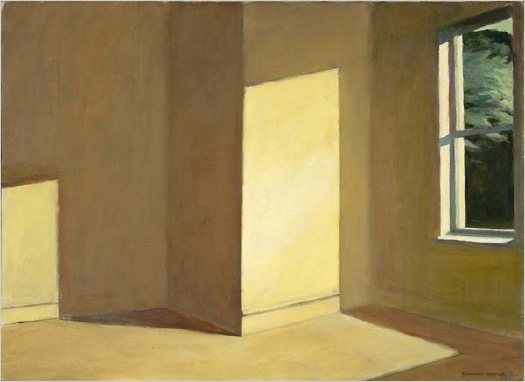 I’m afraid there’s part of me that sees Edward Hopper as a little too loved-it-in-high-school, the Salinger of painting. But I still like Empty Room in the Sun, 1963, and I really like the way Brian O’Doherty talks about Hopper and his work. And the possibility that there may be something worth going back and studying:

Rail: Would you say there’s a subtle similarity between Rothko and Hopper?
O’Doherty: Sam Hunter made a wonderful comment. He said “Hopper does realist Rothkos.” Hopper is far deeper than the sentimental interpretations of him, the easily available loneliness and isolation. The void at the center of Hopper is very much the inner void. His second to last picture, “Sun in an Empty Room” is the closest he got to that exploration of who he was. There’s not enough done on this, because it becomes difficult to articulate. I do believe the void of his deepest nature, which was mysterious to him, is similarly re-enacted in much of Rothko’s art, his opposite in so many ways. Rothko’s daily self was exquisitely sensitive. Underneath he was exploring this void, he was on his quest. It’s not often said that Hopper was on a quest. Rothko was on a quest. Both sounded the void. That’s a little facile, but it’ll do for the moment. It’s that void that returns to us those fictions of self.