I’m still looking for the c. 1958-9 images of the 12-foot satelloon prototype being inflated in the US Capitol Building as part of NASA’s push to fund the 100-foot version. 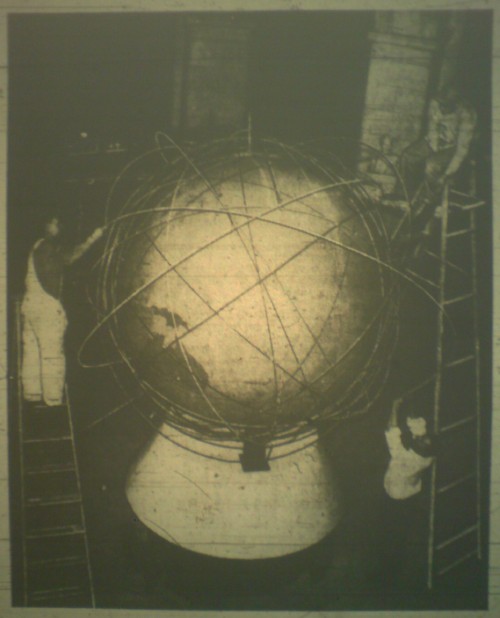 But look what I found in the March 14, 1961 edition of the Washington Evening Star, right above the story about the Mclean bridge club’s Ab Ex artist hoax:

Workmen preparing an exhibit for the House Space Committee put another ring around a huge globe in the rotunda of the old House Office Building. Each ring represents the path of a satellite…

that’s where my photo of the microfilm got cut off, but they’re both Russian and US satellite paths. No idea yet what the hearing discussion was [see update], but this was just a couple of weeks before Yuri Gagarin became the first person to orbit the earth, so I’d imagine this exhibit, whatever its purpose, was soon forgotten.
I’m sure it’s too much to hope for, that the metal bands of satellite orbits hand-assembled 50 years ago for a congressional hearing exhibit [?] have survived in a government warehouse somewhere. But the photo’s credited to the AP, so at least there’s a chance of finding a vintage print of it, right?
UPDATE: Eh, from the Washington Post coverage a few days later, the Space Committee, which by 1961 was called the House Committee on Science and Astronautics, was contesting Defense Secretary Robert McNamara’s rushed order for the Air Force to take over all military space development and to prepare to subsume NASA. So there you go.