was in Carol Vogel’s article on the Hirshhorn’s upcoming Yves Klein retrospective [and the Kleins being auctioned to coincide with it]:

A colorful figure who was an aspiring judo instructor, Klein studied Rosicrucianism and was obsessed with philosophical and poetic investigations of space and science. He actually leapt into space one morning in 1960 by throwing himself out the window of a house in Paris, an act that was documented by Harry Shunk in the photograph “Leap Into the Void.” 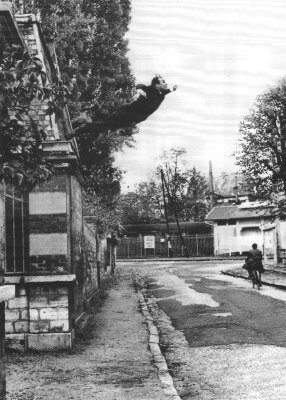 Actually, Leap Into The Void is famously known to be a photocollage. Klein did leap–into a tarp waiting to catch him. He then altered the photo, replacing the tarp with an image of the empty street. 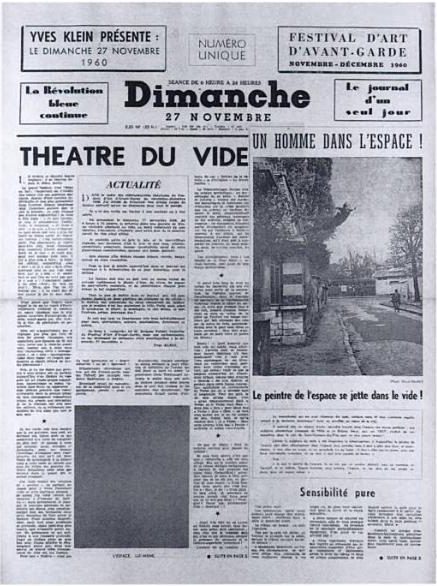 In Vogel’s defense, she’s hardly the first to take Klein’s photo at face value. If Paul McCarthy is to be believed, he made a filmic homage to Klein while an art student at the Univeristy of Utah in the 1960s. He told the LA Times’ Susan Muchnic that he jumped from a second story window–and hurt himself in the process. It wasn’t until some years later that McCarthy actually saw Klein’s image–and learned that it was doctored.
Klein published the image in November 1960 in a parodic newspaper under the tabloid-style headline, “l’Homme dans l’Espace!” Wikipedia’s Klein entry says the photo and the paper denounced “NASA’s own lunar expeditions as hubris and folly,” but of course, there was no lunar program to speak of and in 1960, no human had ever flown into space.
According to the Klein archive, the photo was taken on October 17, at 3, Rue Gentil Bernard, Fontenay-Aux-Roses, in the suburbs south of Paris. Looking at the Google Street View of the location, the house is gone. Actually, looking at the photo, the house is not a house; it’s a large gate, maybe a gatehouse, but still. 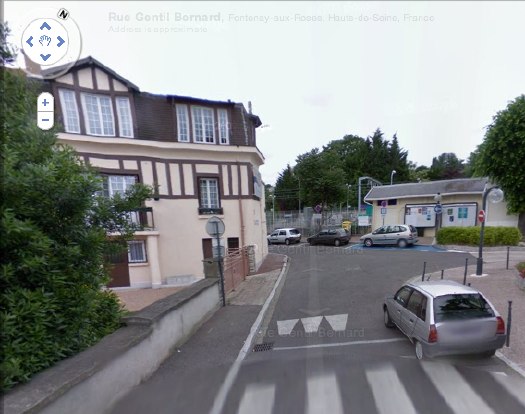 The site now is a contemporary church dedicated to Sainte Rita, which I can’t think is a coincidence. Klein made multiple pilgrimages to the monastery of Santa Rita in Cascia, Perugia and dedicated work to her. His affinity for Rosicrucianism has been mentioned, but I’ve never heard any discussion of the connection between his Catholicism, mystical or otherwise, and his most famous image. The Pompidou’s 2006 Klein retrospective didn’t explore the role of his religion much. But assuming that the site was associated with Sainte Rita when Klein selected it for his photo/performance, I’d think there’s a connection. Not just with the idea of the Void, which is frequently associated with Zen, but with the leap [of faith?]–or the patent fakery of the image itself.
UPDATE Indeed, the location was not a coincidence. It was across the street from Klein’s judo school. According to Kerry Brougher the Sainte Rita de Cascia folks only moved in years later.