Ken Knowlton’s artistic collaborations have been less well-known that his Bell Labs colleague, Billy Kluver, who created E.A.T. Experiements with Art & Technology, with Robert Rauschenberg and who introduced Andy Warhol to Mylar. But we’ll get to that. 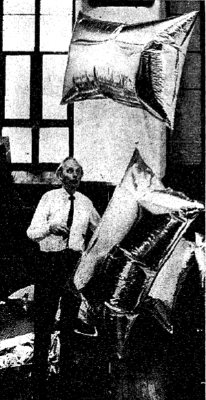 In collaboration with Leon Harmon, Knowlton made some pioneering, ASCII-style artworks, including a reclining nude transformed from photograph to a printout of dot-matrix symbols, which was featured in a NY Times article in 1967 [“Art and Science Proclaim Alliance in Avant-Garde Loft,” Oct. 11, 1967].
The report was about an art/technology “news conference ‘happening'” held in Rauschenberg’s loft, and attended by corporate and union leaders, and politicians, including Sen. Jacob Javits, who is shown with large, pillow-shaped Mylar balloons floating behind him in “the Chapel,” the two-story space at the back of Rauschenberg’s Lafayette St. building. [The occasion was a reorganization of E.A.T.]
They’re the same balloons Andy Warhol had used in his April 1966 installation, Silver Floations, which he’d learned about from Kluver. [Bell Labs, of course, was also the ground operator of the Mylar communications satelloons of Project Echo, which launched in 1960 and 1965.]
Anyway, 18 months later, it’s Kluver whose seen batting these balloons around, with nary a mention of Warhol to be found. Odd.
Willard Maas made an awesome short film about the show in 1966. It’s at YouTube or UbuWeb: