While rummaging around in Vito Acconci’s early exhibition history for traces of Kathryn Bigelow’s work [more on that in a second], I came across a set of three early, short Super 8mm films I’d never heard of: Three Attention Studies, 1969.
They’re all 3min. each, the length of a Super 8 cartridge, and made in conjunction with Peter Lupario, but it’s the last one that’s most interesting:

In Catching Up, the performer and cameraman walk side by side across a field. Sometimes the performer falls as the camera continues its pace; the performer must make an effort to catch up and return into the frame.

If that’s Lupario in the still above–and it doesn’t look like 1969 Acconci to me–these three films are notable for featuring the artist behind the camera, as the viewer, instead of in front, as the performer/subject.
These studies preceded by several months the 1970 body-related performance pieces for which Acconci became known. In a 1983 retrospective of the 8mm works at the Whitney, curator John Hanhardt said Acconci is “one of the first artists to successfully develop a significant oeuvre in the Super-8 film format.” [PDF via vasulka.org]
So this Catching Up, I’d like to see. If anyone knows where it exists digitally, I’d love to hear about it.
Now back to Bigelow. I’m beginning to think that the Acconci project that most closely matches the dates, descriptions, and details of Bigelow’s recollections is his 1973-4 Super 8 “feature,” My Word. [Of course, I haven’t seen it, even though it showed at X-Initiative last September.]
At two hours [or 90-something minutes, which may be an earlier, pre-1983 version], it required a lot of shooting. Hanhardt describes it as

composed of written statements alternating with shots of the artist in his studio and around his building. Acconci is the central protagonist whose gestures, actions, and written statements are all addressed to women–women are the other, unseen, presences in this work. The point of view of the camera can be interpreted as that of the women, silently confronting Acconci, or that of Acconci himself, mirroring his every move.

I don’t like to, but I can imagine that’s Acconci riding some kind of bondage apparatus with a large film projection behind him in the My Word frames below: 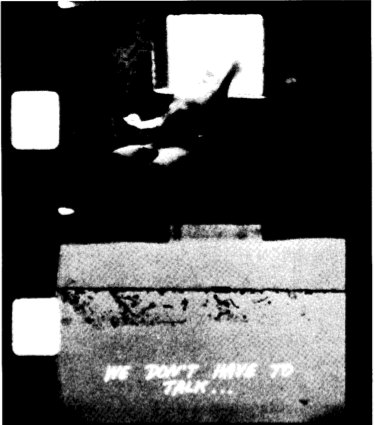 My Word was a turning point, the last time Acconci included himself on-camera in his work. If this is the one, Bigelow actually shot some, part, or all of one of Acconci’s most significant works. Too bad the Academy doesn’t have some kind of lifetime achievement in dues-paying hardship award.
Previously: Tracking down Kathryn Bigelow’s early conceptual oeuvre