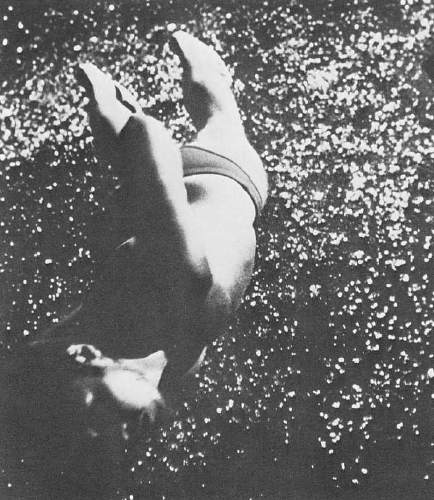 Through The Night Softly was a 1973 performance piece-as-latenight-TV-commercial by Chris Burden. It’s a 10-second video of the artist, in a Speedo, inching on his stomach across a parking lot full of broken glass. [View it on UbuWeb.] Burden wanted to be on “real TV,” and 10 seconds after the local LA news was all he could afford at the time.
[clarification after watching it again last night: Through The Night Softly is Burden’s title for the actual performance and/or the video of it, which goes on longer than 10 seconds. TV Ad is the clip of TTNS on TV.]
More than the cringe-inducing action itself, which is closely related to other works he was making, Burden talks about the piece in terms of its context–its startling juxtaposition and inexplicability among shampoo commercials and Movies of The Week. In the EAI video compilation above, he also talks about how hard it was for the TV station to take him seriously, even though they both realized he was a “small customer.”
Well, consider that problem solved. Slate’s Seth Stevenson has a fascinating video about Google TV, which lets you buy actual TV ad time the way you buy AdWords: a few DIY clicks at a time.
Stevenson made a goofily paranoid 30-second commercial out of vintage stock footage, then spent just $1,300 to run it 54 x/wk on Fox News, where it was seen by several hundred thousand 1.4 million [!] people.
They got a thousand people to visit their website, which is a horrible conversion rate, but who cares? You could have a dozen more interesting goals and invitations to the viewer that make more sense. Or none at all. Can you imagine what the video art world could or should be doing with this? The mind reels.
Assuming Google would allow it, of course. When AdWords first came out, I regularly used it for publishing, not advertising. I’d write little haiku-like ads keyed to search terms that had no ads at all, like, at the time, Agnes Varda. [Hmm, nearly eight years later, a Google search for “agnes varda” still returns no ads.]
Anyway, it lasted until Google announced their IPO, and they instituted a new TOS for the program. It’d be interesting to see what the contours of Google TV’s commercial standards are, and how they affect content.
I suspect Chris Burden’s original ad wouldn’t fly today. But I’d love to be proved wrong. And I’d love to see these ads run, then get taped and uploaded in context to YouTube, where they could continue to reach an audience. LAXArt organized a series of artist-produced billboards around Los Angeles. And Creative Time programs video art onto giant monitors in Times Square. Where’s the public art organization curating and running 10-30 second video art on cable? What about an artist or group of artists creating programming for the format and airing it themselves? BHQF-TV, anyone? Stick a sponsor slide on the end for a couple of seconds and the piece pays for itself.
How I Ran an Ad on Fox News [slatev.com via @joygarnett]