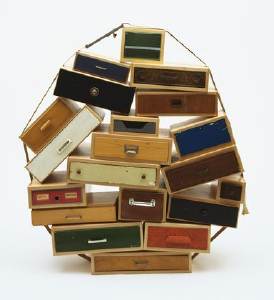 Hello, English-speaking media world! What have you been doing the last twenty years that you have not ever produced an article on Tejo Remy, the only designer to consider the borders of furniture and art?
Never mind, Blake Gopnik is here to correct this unforgivable travesty of public relations and/or poor Nexis searching skillz:

It has been two decades since Remy’s stunning debut, and this article is the first one in the English-speaking world to try to take his measure.
“We are walking a line: ‘Is it art or design?’ ” Remy says. And they are walking it almost alone.

Yes, alone except for the designer of every single item between Milan, Miami, and Moss–and half the people who passed through Utrecht in the last twenty years! But please continue, o design historian!

Even most avant-garde designers have come up with new models for comfort and ease — turning away from Victorian velvet-on-oak, for instance, to embrace Bauhaus, then Danish modern. What few designers have done is work to abolish comfort itself as a design principle, in favor of objects that disconcert. That’s the Remy and Veenhuizen model.
…
You can still order one of Remy’s drawer-piles from the Dutch distributor Droog, which sponsored some of his early work and has become much better known than Remy himself. 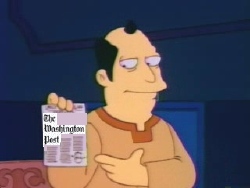 “Distributor”? “sponsored”? Droog began as a design collective, with Remy as one of its early members. His drawer-piles [sic], aka the You Can’t Lay Down Your Memory bundled bureau, dated 1991 and exhibited in Droog’s Milan debut in 1993, was the collective’s signature design.
I don’t begrudge Remy or any early Droog participants for seeking to build their own brands outside the increasingly corporatized Droog umbrella. In the last several years, Remy’s been using language to distance Droog from his design and process, by saying they “commissioned” the dresser. Now it’s “sponsored.” But only someone completely ignorant of the history of design generally–and of Dutch design and Droog specifically–could write something as wrong as this.
Dutch design team Tejo Remy and Ren & [sic] Veenhuizen mount first U.S. ‘solo’ show [washpost]
image and completely contradictory explanation of Droog and Remy via moma.org