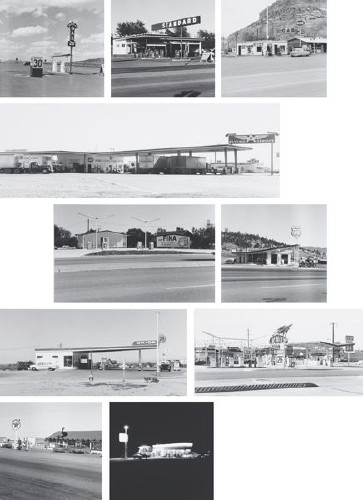 10 works from Twentysix Gasoline Stations, 1962/1989, each 50x58cm, edition of 25
I am a huge Ed Ruscha fan, have been for a long time. His artist books of typological photographs were some of the first works of art I bought out of college [fortunately, since they’re all 10-20x more expensive now].
But I confess, though I find them entirely appealing, I’ve never really been completely comfortable with the sets of 1960s photos Ruscha republished in large-scale, large-ish editions, beginning in the late 1980s and 1990s.
They’re important images, but they seem so inextricably linked to the books to me. And books are hard to show, and not as sexy to collect. So yeah, it’s totally fine, of course, but these have always seemed a little bit too much like eye candy and cashing in. 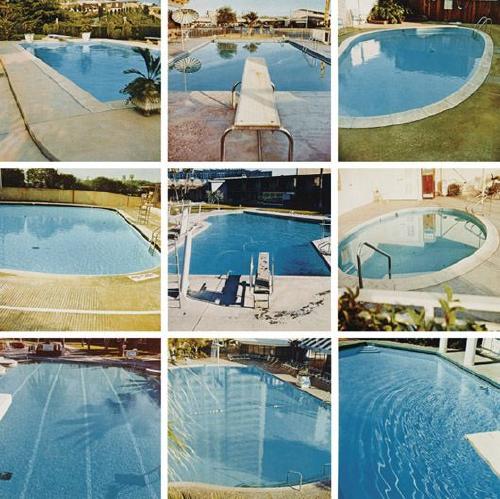 Pools, 1968/1997, each 40x40cm, edition of 30 plus 10 artist proofs.
So it’s not at all surprising to me that these two particular sets were in Halsey Minor’s collection, and will be auctioned off this week.
But even though they’re dated 1962/1989, Phillips de Pury’s exhibition history for the [to me problematically named] set up top, 10 works from Twentysix Gasoline Stations, says they were shown in 1982, at the big Ruscha mid-career show at SFMOMA [but oddly doesn’t mention the follow-on venues, the Whitney and LACMA. Or maybe it’s not so odd; Phillips’ catalogues have always been a little spotty, with just as much verbiage and annotation is necessary to move the merch, not further the scholarship.]
Which I didn’t see, obviously, but maybe I’d be a little less skeptical towards these works if Ruscha has had a history of showing them in larger, exhibition-size formats? If anyone knows where Ruscha talks about these republished photos, or where they’re discussed at all, I’d love to hear about it.