A digitized collection of vintage NASA Goddard Space Flight Center newsletters led me to the June 23, 1963 issue of LIFE Magazine. If it were possible for any photo of a Project Echo satelloon to be slightly less than awesome, this photo would move forward to be the awesomest: 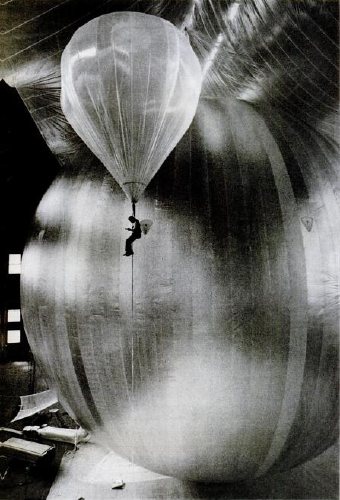 It’s a technician inspecting for leaks during a test inflation of the Echo II at Lakehurst, New Jersey, which was long the Navy’s site for giant inflatable vehicles. From the 1930s construction photos of the massive dirigible hangars to the parades of Navy blimps during WWII, the “Lakehurst” is a stealth candidate for awesomest single search term Google’s LIFE Magazine image archive. Unfortunately, this photo is not included. I’d love to find it, though; someone deserves a credit.
Here’s one of the same test, only there’s no location, and it’s misdated. credit: NASA. And it’s public domain. Here’s one of the first ever photos of an Echo satelloon; famous LIFE photojournalist Grey Villet took it while standing next to the antenna used to bounce the first radio signal off Echo I in 1960. 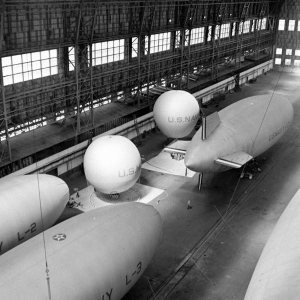 All of this is related to my master plan to show a satelloon as an art object, sure, but it’s also precipitated by NASA’s latest, the Bullet 580, dubbed, depressingly, “the world’s largest inflatable airship,” which was test inflated last weekend. At 235 feet long and 65 feet across, it practically fills the Garrett Coliseum in Montgomery, Alabama [below] 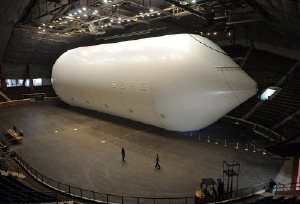 If there were a clearer sign that Our Nation has lost its way in the field of Giant Balloons And The Buildings That Hold Them, I can’t think of it. A sad, sad day. [images: George Strock/LIFE; AP]