I’ve got browser tabs full of sweet, sweet updates and extensions to some earlier posts. I’ll start with Tomasons. 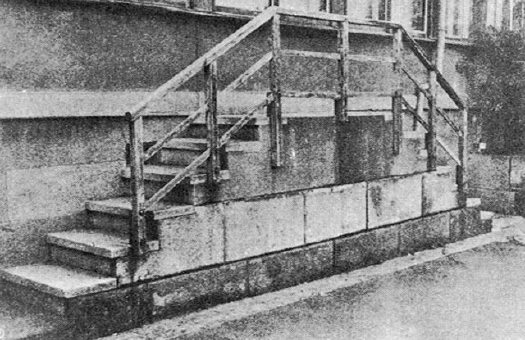 Tomasons [also Thomassons], but really, トマソン, are the inadvertent, useless architectural leftovers, vestiges of a city’s churned and rebuilt history. They were invented/ discovered and documented beginning in the 1980s by the Japanese art/architecture collective Rojo Kansatsu [Roadside Observations] and its co-founder Akasegawa Genpei.
At the time, Japan was in the middle of a crazy, real estate-fueled economic bubble, and the built environment was in constant flux. Akasegawa made Tomasons the humorous, overlooked fodder for a magazine column, the compilation of which became a hit in the 80s.
Now, thanks to Kaya Press, Akasegawa’s Thomasson writings have been published in English. Should be great stuff. [via metafilter]
Previously, 02/08: On Tomason, or the flipside of Dame Architecture
Related: Roadside Observation [neojaponisme.com]
Related from last week: Berthier’s (and Boudvin’s) Door, a fake Tomason in Paris [bldgblog, who else]